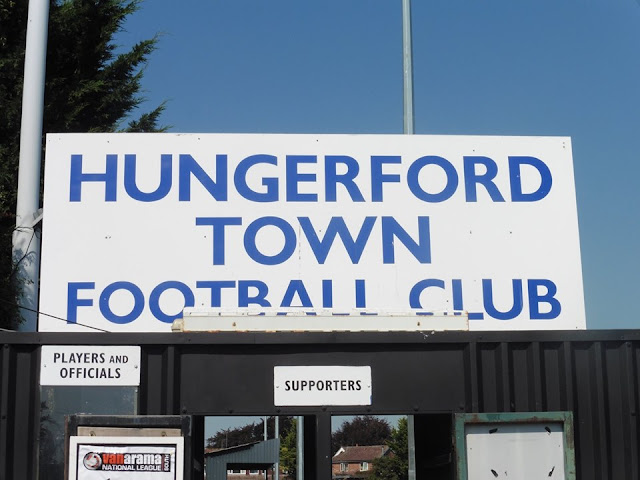 BRIEF HISTORY/FACTS ABOUT THE CRUSADERS:

Hungerford Town Football Club were formed in 1886, only playing friendlies as at the time there were no local leagues to join or cup competitions. After a couple of practice games, the first game against another club was against Earley which they lost 6-2. In 1904–05 they won their first honours, the Newbury Challenge Cup, by beating Newbury Union Jack 2–1 in the final. They won the trophy again in 1908–09 with a 2–1 win over Thatcham in the final. The club was now playing in the Hungerford League, but later joined the Newbury League. They won the Newbury League in 1912–13, retaining the title the following season. After World War I the club won the title again in 1919–20 and for a fourth time in 1921–22. They later joined the Swindon & District League. In 1958 Hungerford moved up to the Premier Division of the Hellenic League. They finished bottom of the division in 1964–65, resulting in relegation to Division One. However, after winning the Division One title in 1970–71, they were promoted back to the Premier Division. In 1979–80 Hungerford reached the first round of the FA Cup for the first time, losing 3–1 to Slough Town, they also reached the semi-finals of the FA Vase again, this time losing 5–3 to Guisborough Town. The 1981–82 season saw them win the Berks & Bucks Senior Cup, beating Wycombe Wanderers 1–0 in the final. League restructuring in 1984 led to the club being placed in Division Two South. Hungerford won the Hellenic League's Supplementary Cup in 2004–05 and the Challenge Cup in 2006–07 and 2007–08. They were Premier Division champions in 2008–09, earning promotion to Division One South & West of the Southern League. A fifth-place finish in 2011–12 saw the club qualify for the promotion play-offs, losing 2–1 to Poole Town in the semi-finals. They were Division One South & West runners-up the following season, again qualifying for the play-offs; after beating Paulton Rovers 4–2 in the semi-finals, they defeated Merthyr Town 3–1 in the final to secure promotion to the Premier Division. The 2014–15 season saw Hungerford finish fourth in the Premier Division. In the subsequent play-offs they lost 1–0 to Truro City in the semi-finals. However, after another fourth-place finish the following season, they defeated Hitchin Town 3–2 in the semi-finals before beating Leamington 2–1 in the final, earning promotion to the National League South.


My visit to Bulpit Lane came on Bank Holiday Monday in August. Usually on a Monday I would be normally at work till the evening but as there were more fixtures on the Monday and also a 3pm kick off, would make perfect sense to do some Groundhopping on this day. Luckily I was able to get a shift swap at work sorted and it was Hungerford all sorted. I did have a brief look at other fixtures, but this one was the one that stuck out the most. I was hoping my good mate and Dartford supporting Phil would be going, but he was stuck with other things going on, so this would be a case of going on my own which I wasn't too worried about anyway. It would prove to be a baking hot Bank Holiday in Hungerford. My journey started after leaving just after 11am into London Victoria, couple of changes on the tube to Paddington, and then a straight train from there to Hungerford. Only downside was with only 1 an hour trains, but I arrived into Hungerford itself around 2.20pm. With a short walk to the ground, I arrived with time to spare. £12 admission and £2 programme would be today's price. As per usual, I did my lap of walk round of the ground taking photos. I also bought a Koppaberg at the ground at £5 but that includes for the cup which you get you £1 back so technically £4 but it was lovely so can't complain. So as the game was near approaching to kick off, I decided to stand on the side of the pitch for the 1st half. One player I recognised for Hungerford would be James Constable the ex Oxford United striker starting for Hungerford, a player I've seen play against Gillingham in the past. So today would be Ground 161 and Game 15 of the season, having already seen 47 goals so far for the season. 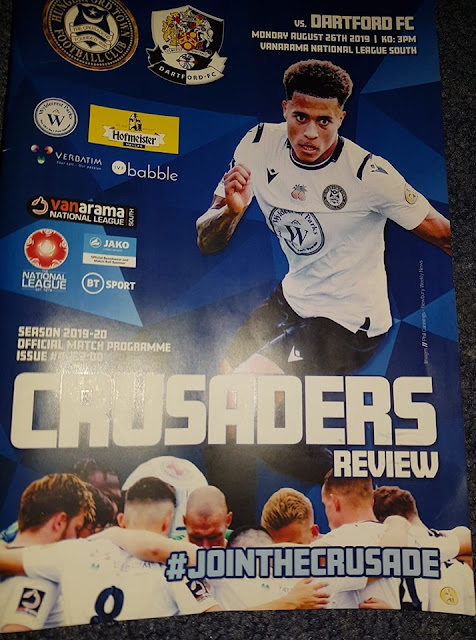 
As above you can read the full report on Dartford's website. Overall I thought it was a fairly good game to watch, Dartford becoming very unlucky not to take home all 3 points only be be denied at the death from Conor Lynch's equaliser. After hearing Dartford don't have a great record at Bulpit Lane, I'm sure they'll still be delighted to take a point there. After slight delays on the trains on the way back, I was home shortly after 9pm.

Hungerford Town have mostly played at Bulpit Lane for most of the club's history. The club originally played at Hungerford Marsh before moving to Bulpit Lane. Floodlights at the ground were installed in 1975. Hungerford railway station is around a 15 minute walk to the ground. 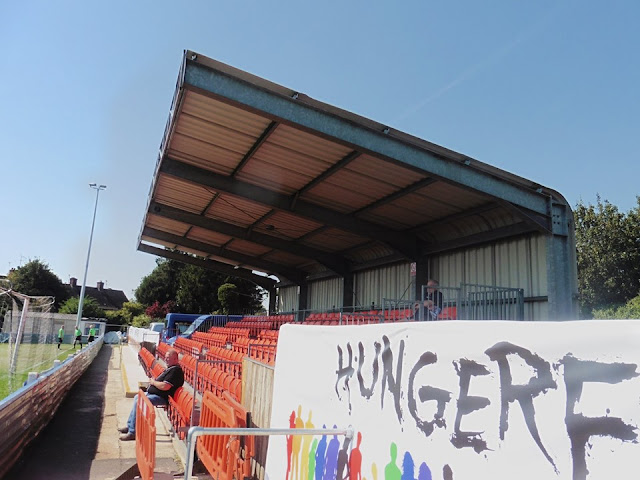 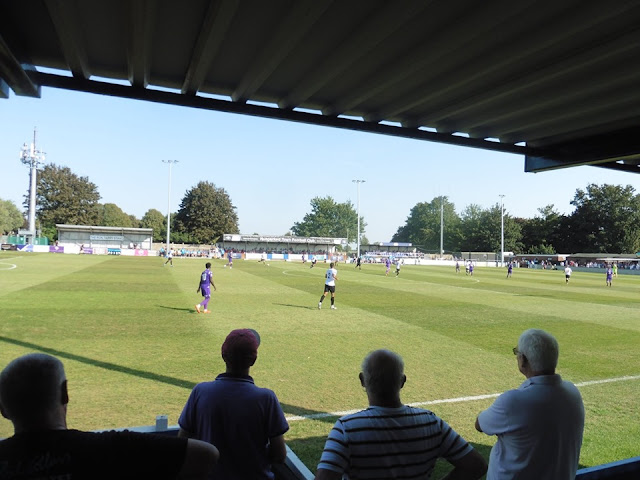 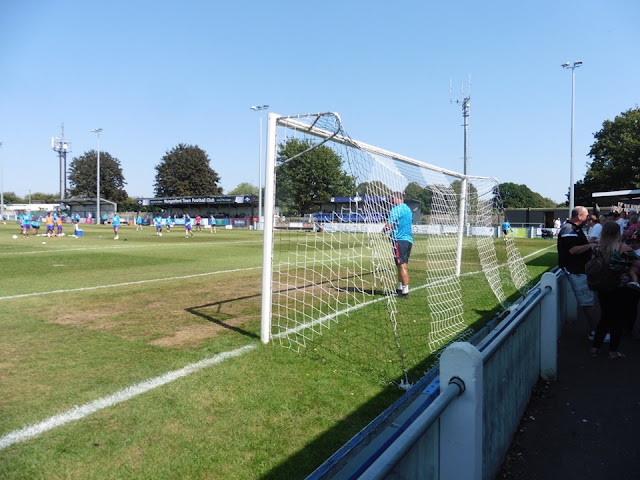 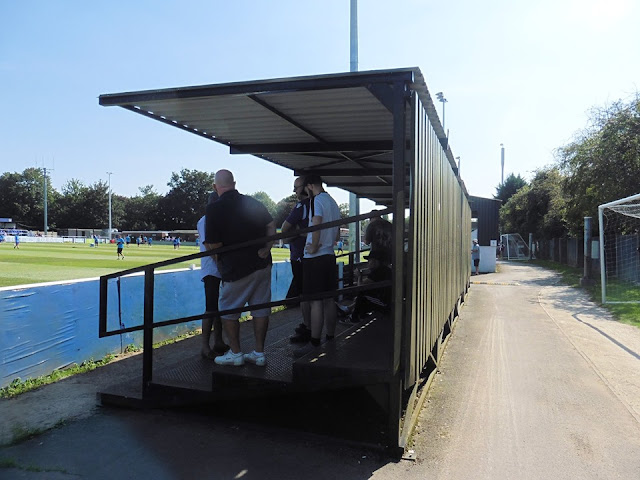 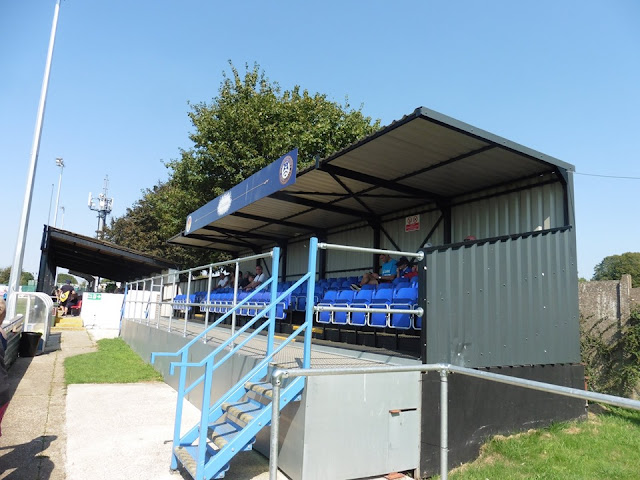 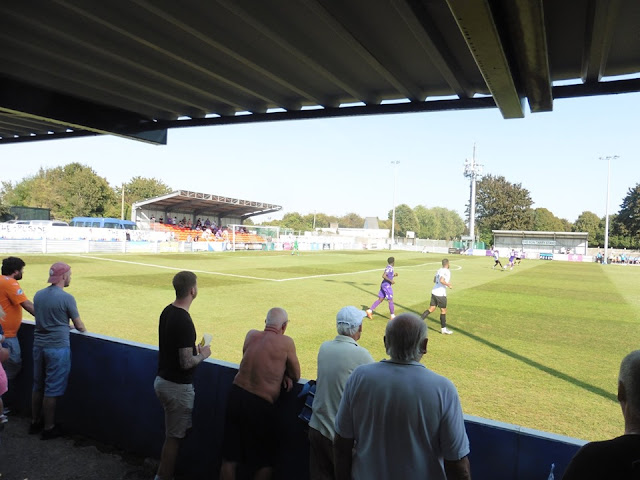 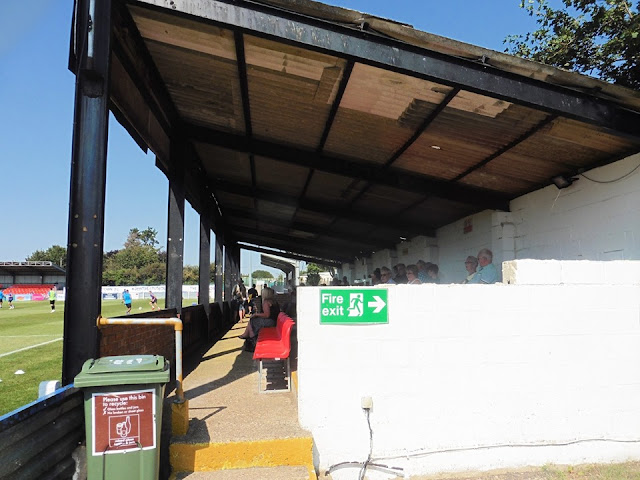 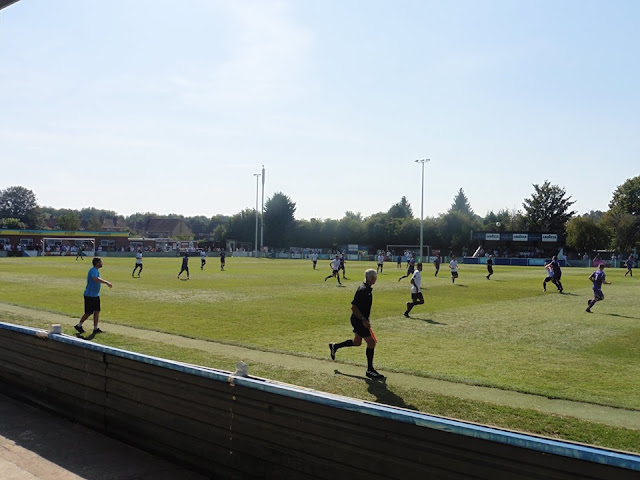 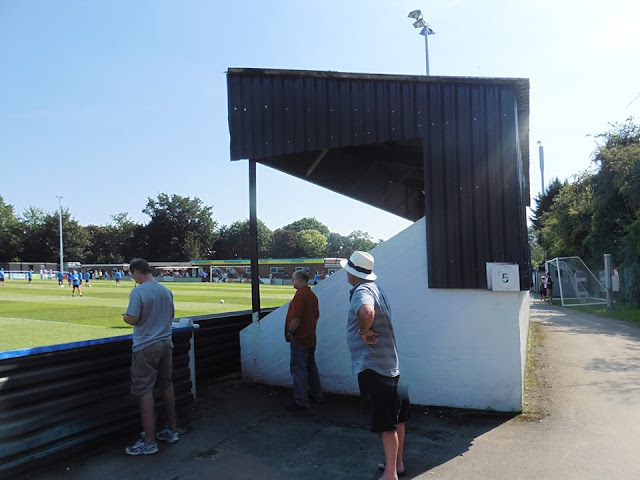 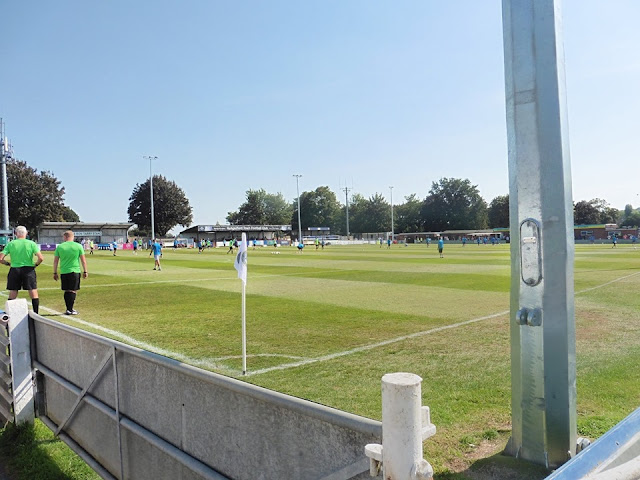 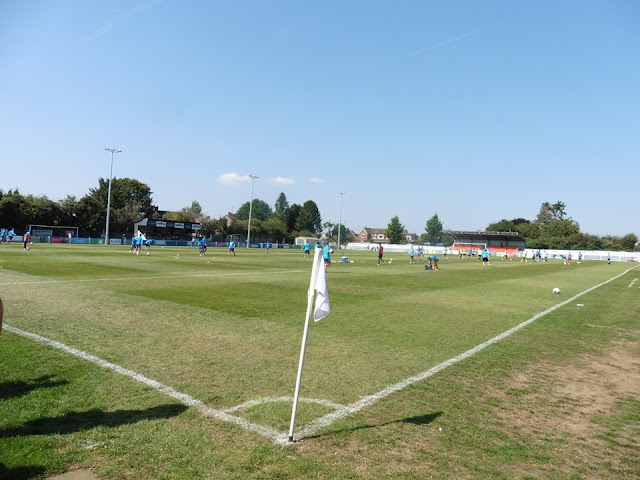 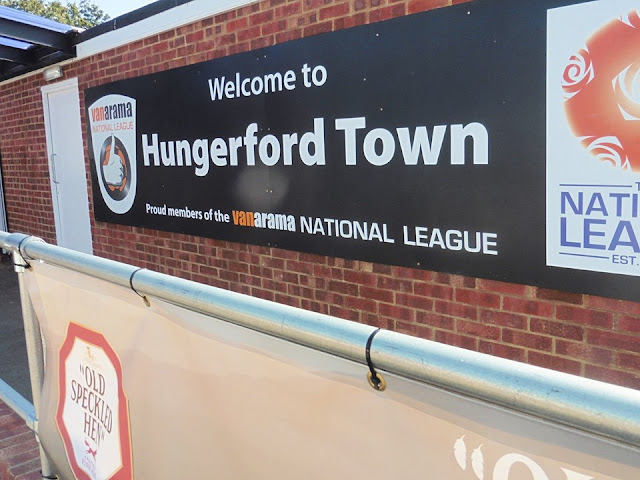 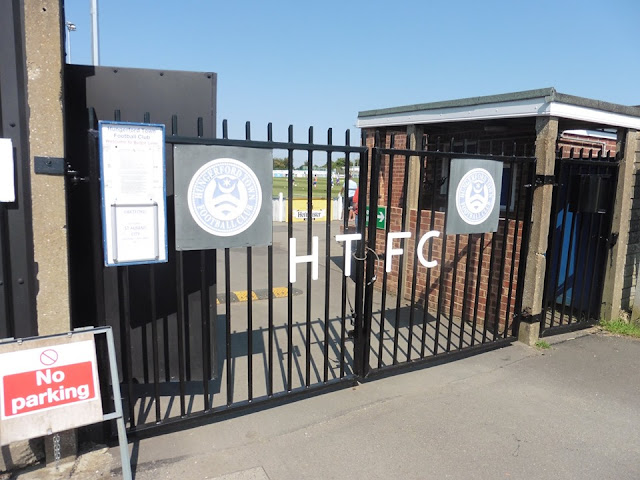 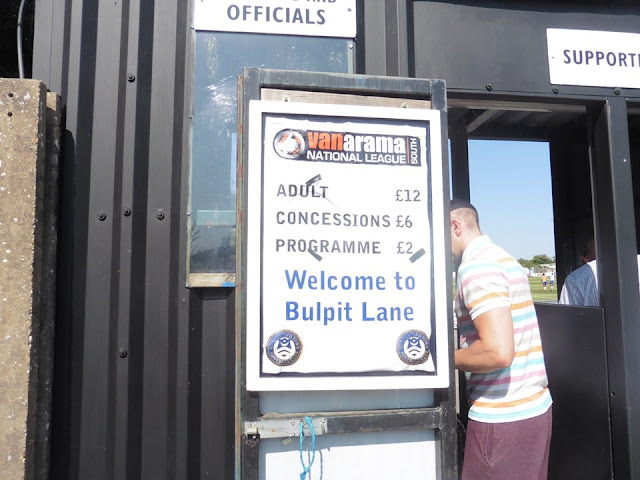 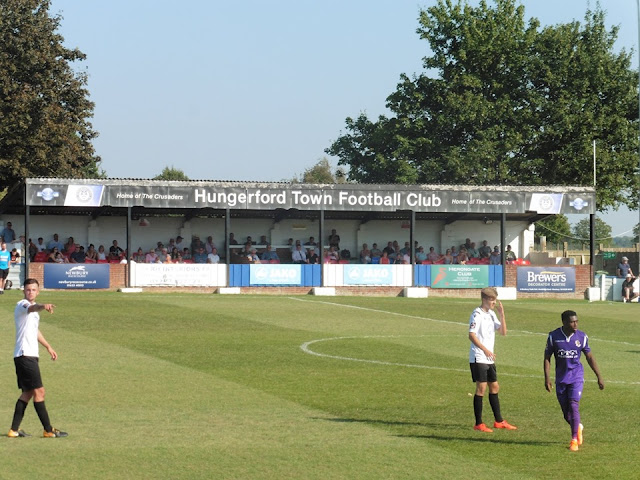 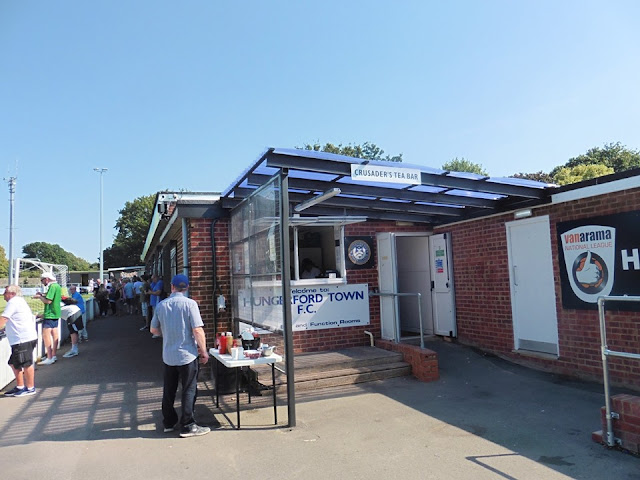 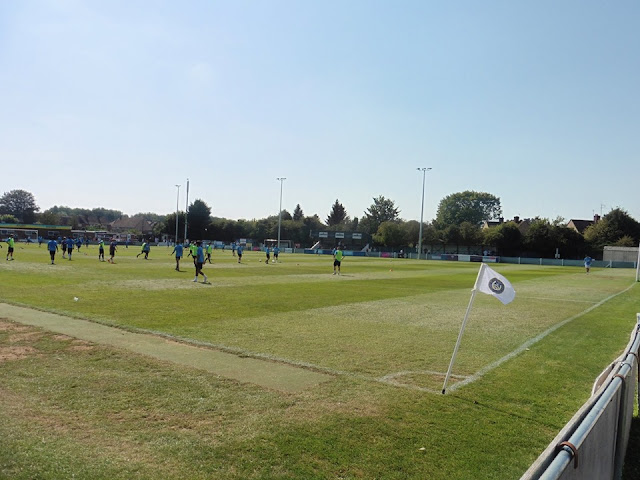 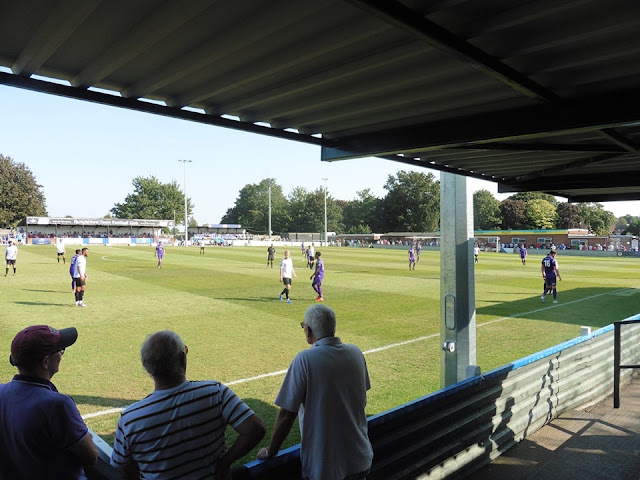 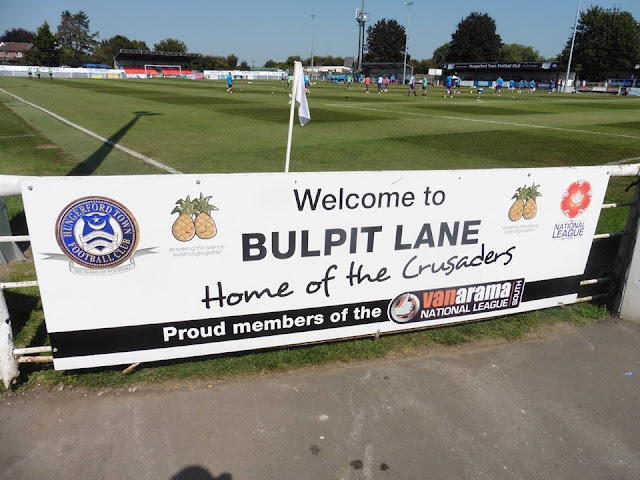 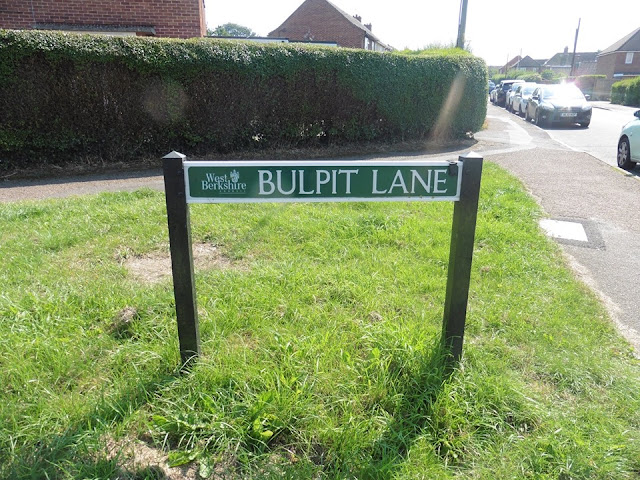 Posted by Football Grounds at 12:17