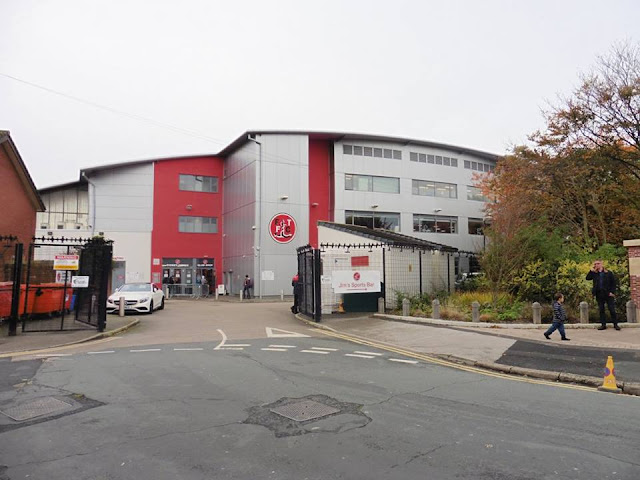 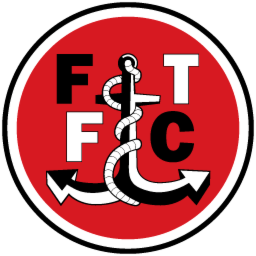 I have been to Highbury twice now, both times of course with Gillingham. Both times to Highbury I went with the Gills unofficial supporters coach, and boy, they were both long, long journeys. My first visit was quite a good day, as we took just over 500 Gills fans to the long dreaded journey to Fleetwood, which ended in a 2-2 draw. Danny Kedwell putting us in front early on but then Jamille Matt equalised but then Charlie Allen, the son of at the time manager Martin 'Mad Dog' Allen, put us back in front just before half time. Fleetwood equalised once again in the 2nd half to share the spoils from once again Jamille Matt. My 2nd visit, Fleetwood got all 3 points in my last visit which saw Tom Hitchcock get the winner in a 1-0 win. My last visit I vaguely remember as one of the down points of that game which saw Josh Pritchard at times bottle out of challenges which of course angered another fellow Gills fan I know, as I like to call him Fuming Steve. It angered me as well as I'm sure most of you will agree, in a game of football, you want to win the ball as much as you can, but in this case, I think Pritchard was more bothered about picking up the money than caring what the fans thought. I did send him a tweet on Twitter after the game, but wasn't surprised with no response from Pritchard, but oh well haha. Highbury Stadium is mainly an all terracing stadium apart from one side of the pitch which is seated. 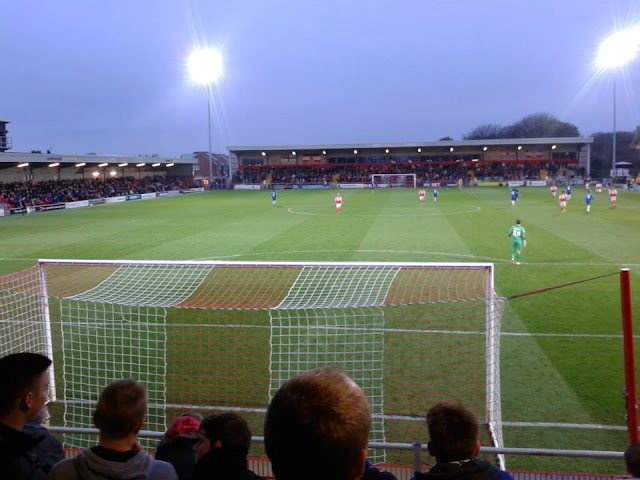 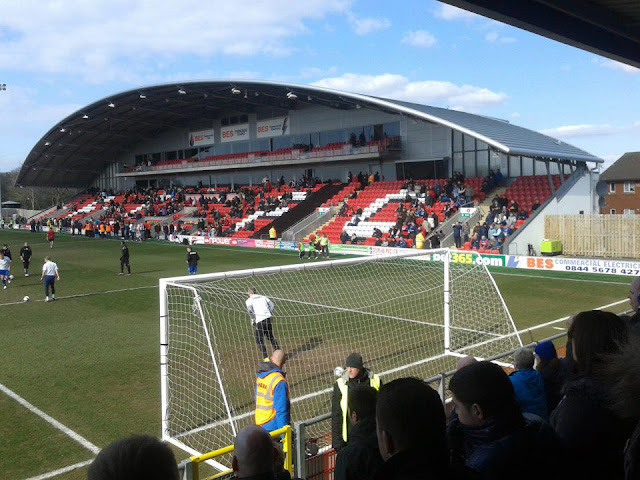 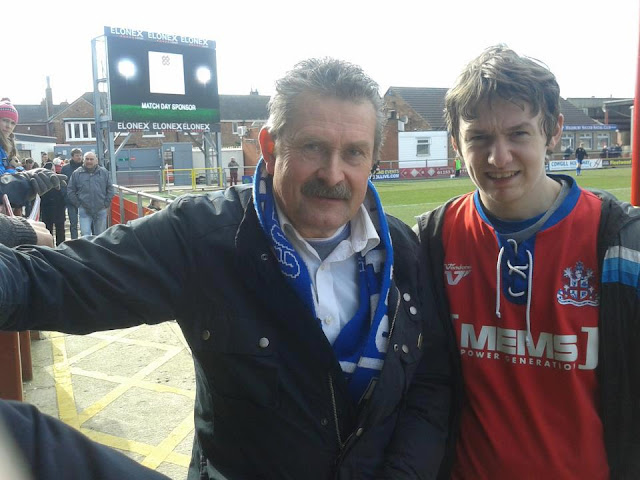 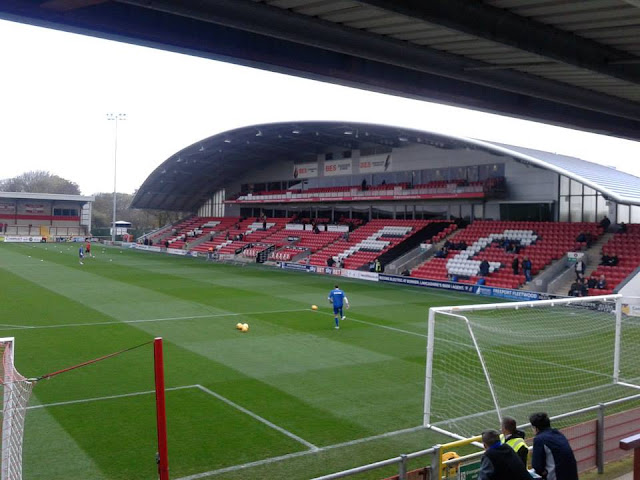 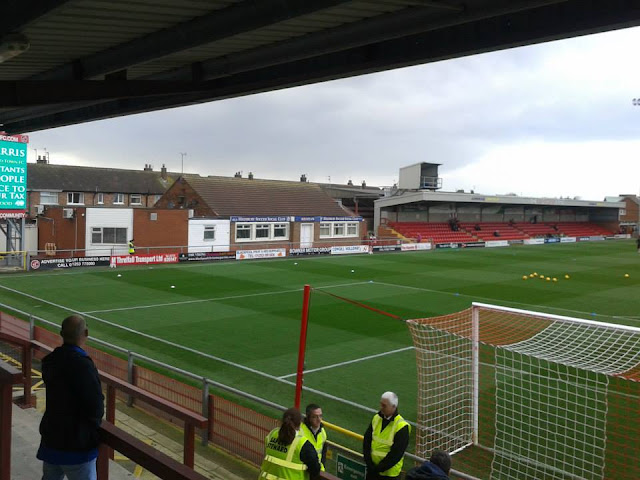 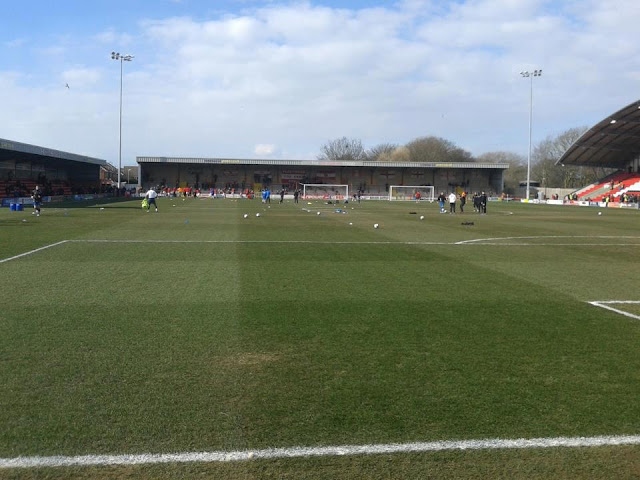 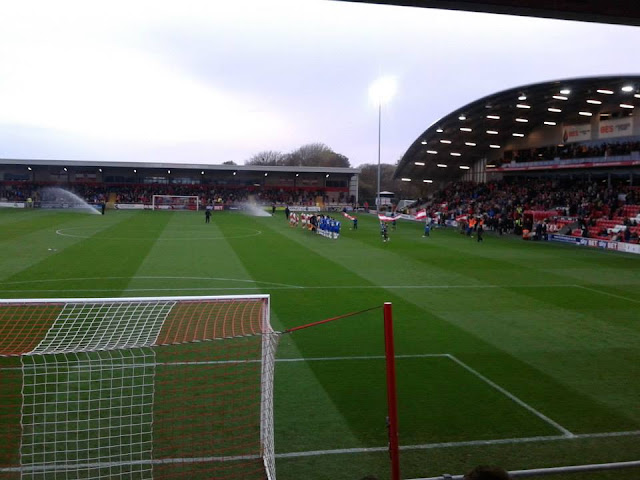 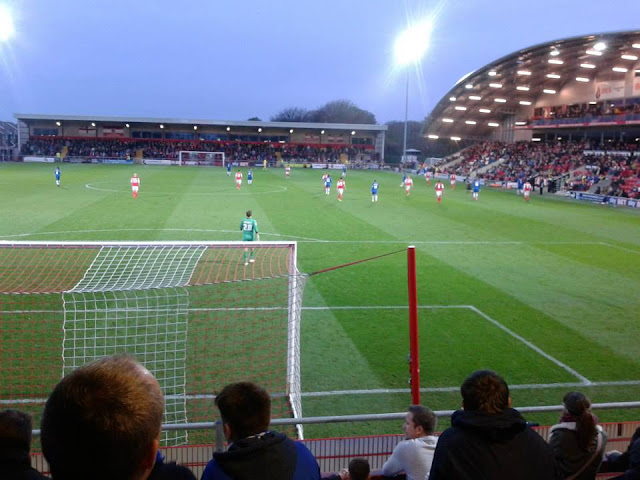 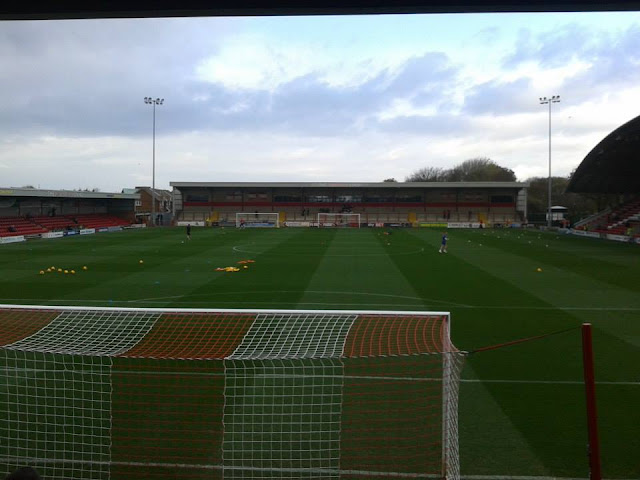 My 3rd visit to Highbury came about when planning to do another weekend in Blackpool was on the cards. After doing a weekend in Blackpool for Blackpool away the previous season, with Blackpool being relegated to League Two, there was only another option. Fleetwood. With Fleetwood just being on the other side of Blackpool, another weekend had to be done. I've done quite a few weekends in Blackpool now all with my girlfriend and we absolutely love it up there. It was made even better when I heard the Blackpool Illuminations were going to be on whilst we were up there, so was interesting to see what they'll be like. Anyway, as we arrived into Blackpool the day before and stayed over until Tuesday in a local B&B, we arrived into Blackpool around 3.15pm and got into our B&B about 4ish at North Pier. On the Saturday, we left for Fleetwood early in the morning around 10/11ish to get the tram to Fleetwood and have a look around Fleetwood Market and do a bit of shopping and was worth it. Quite decent prices for some nice things. Anyway we got to the ground quite early as we'd finished looking round Fleetwood Market and got some lunch at the local chippy just outside the ground, was very nice as well. Anyway after having a quick chat with a mate Dom at the ground, after hearing he got up at 5am to go to Fleetwood, I immediately thought stuff that, I don't miss getting up at that time especially after being in Blackpool the day before. And plus on my last visit to Fleetwood was around that time of getting up and a long coach journey, so wasn't missing on that all. Anyway, I won't mention too much on the game itself, just another boring dull defeat watching Gillingham and too predictable as well. Matching the all time record of 27 games without a clean sheet, another defeat and another game without a win. But I wasn't going to let that ruin a good weekend in Blackpool. Anyway after that, I then stayed in Blackpool with my girlfriend till Tuesday evening and got home just after midnight. An enjoyable weekend in Blackpool stress free (well apart from watching Gillingham) and back to reality now! 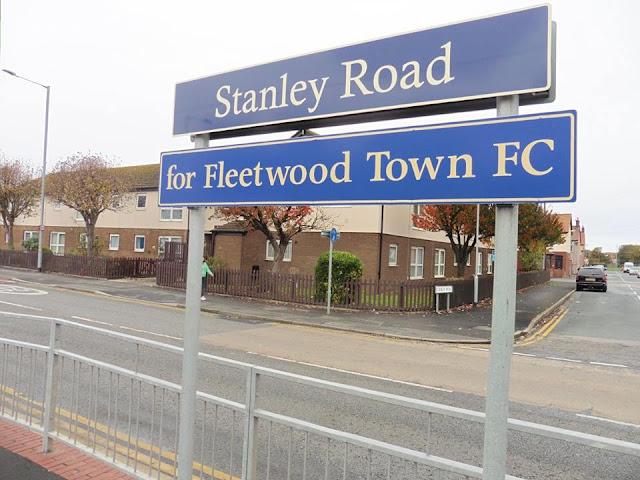 EASIEST WAY TO GET TO FLEETWOOD BY PUBLIC TRANSPORT;

The easiest way I think on getting to Fleetwood by public transport is (ok you could look at Football Ground Guide) but the way I went to Fleetwood is by tram. But if you're only going up on the day, is coming from London wise, is London Euston to Preston, change at Preston to Blackpool (Blackpool North I'd say as more trains run to North than South) but I went to South as of course I did a weekend up there but probably ideally to Blackpool North as more trains run there. From Blackpool North, the nearest tram stop is North Pier which is around a 10 minute walk from North station. And then onwards, wait for a tram which is heading to Fleetwood Ferry, get off at Stanley Road just before Fleetwood and it's around 300 yards to the ground. Another way you can get there is Preston to Poulton Le-Fylde by train and then a bus to Fleetwood but haven't tried that one. But yeah the trams at Blackpool are very easy, they run at least every 10 minutes, so that's the easiest way I think anyway on getting to Highbury. 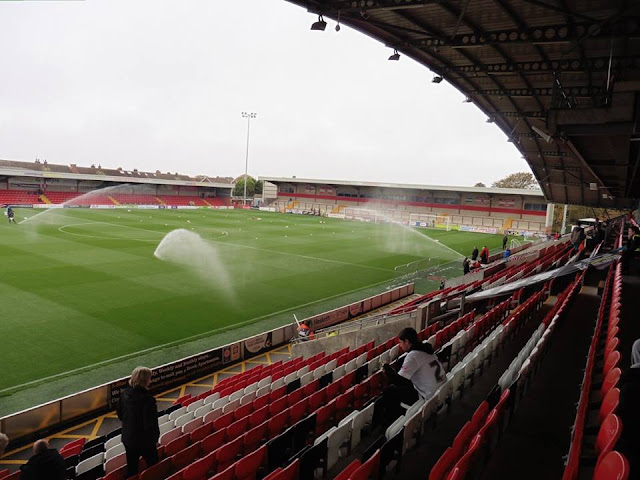 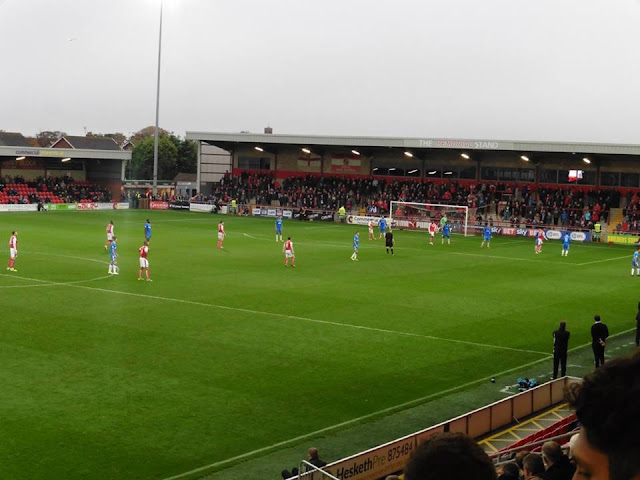 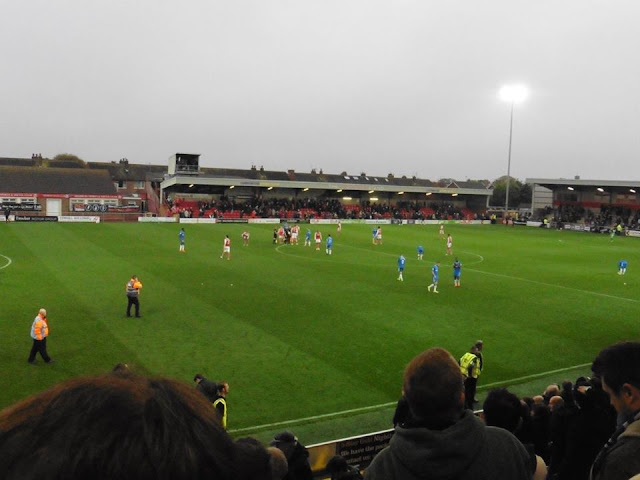 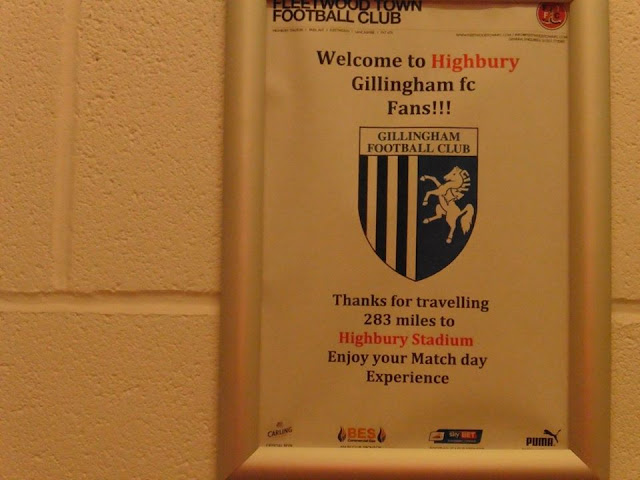 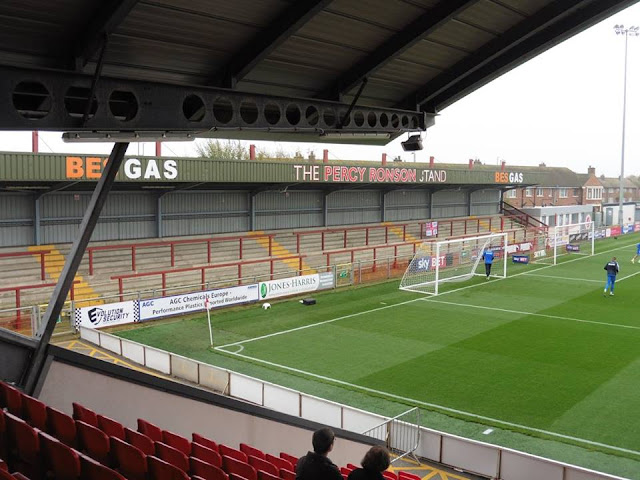