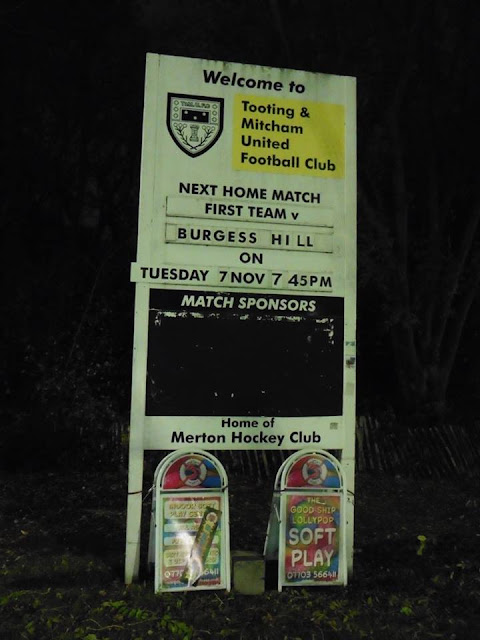 Tooting & Mitcham United Football Club were formed in 1932. Before that Tooting FC who were formed in 1887 and Mitcham Wanderers who were formed in 1912, then they become united as 1 club representing 2 areas. Originally they played in white shorts, and then later adopted into black and white stripes, which happened in 1956. The club have reached the FA Cup 1st Round proper on 10 occasions, more recently being in the 2009-10 season, losing out to Stockport County, losing 5-0. The club's most famous FA Cup run came in 1959 when the club reached the 3rd round, taking a 2 goal advantage against Nottingham Forest, before they hit back through an own goal and a penalty which took it to a replay back at Forest. Forest then won the replay 3-0, in a crowd of 42,362, and also Forest then went onto win the FA Cup that year. In 1976, they reached the 4th round of the FA Cup, losing to Bradford City 3-1. The club have been playing at Imperial Fields since 2002, and holds 3,500 with over 600 seats.

It was back to Groundhopping action for me this week. I had a week off Groundhopping due to receiving some heart-breaking news (as some may know) a week ago today. Last week my original plan was to be Staines Town vs Enfield but I decided to scrap it in the end, I wasn't in the right frame of mind to go to football, probably the wise move not to go. But this week, I was glad to be going to another ground. After looking at the fixtures, really I set my mind on this game. After watching a video I believe it was GroundhoppingFC on YouTube, plus looking at pictures on various sites of the ground, it looked quite impressive from what I saw, and I wasn't to be disappointed. After leaving home about 5ish, I arrived to the ground shortly after 7pm after getting the London Croydon Tram from Wimbledon which was fairly straightforward, only took about 10 minutes. When I arrived, I was quite surprised to see the gates now open, despite this being 7.20pm. But I wasn't to wait for too long as the gates opened shortly after. £10 to get in which was to be expected as well. I got in the ground, and went round the ground to take some pictures, and I was quite impressed. Behind both goals and on the side of the pitch, you can get a really good view of the game. It was very cold and wet as well which didn't help the night either. 1st half I sat on the side of the pitch which saw Burgess Hill Town take the lead and go into the break 1-0 up. I checked my phone at half time to check the Gills score as we were playing Reading in the Checkatrade Trophy, a Trophy that has been completely ruined, I wasn't majorly fussed on going to Priestfield tonight anyway as I'll be back there on Saturday for Bury at home. I was quite surprised to hear we were 4-1 up at half time but none the less, pleased to hear we've scored anyway, to keep confident levels going as well. Anyway, 2nd half I stood behind the goal with the Tooting fans who made a bit of noise. Only disappointment was Tooting fans moaning constantly about the referee for most of the 2nd half. Yes referees can be bad, and most of them are awful, but no disrespect to Tooting fans but the ones that stood behind the goal in the 2nd half were awful. I don't think the ref was great but wasn't that bad I thought. Anyway, Tooting equalised with a neat finish but Burgess Hill got the winner with a few minutes to go with a decent header from a corner. Not a bad night overall, just very cold and wet. After the game, I was shocked to hear that Gills in the end beat Reading in the Checkatrade Trophy 7-5. Yes, 7-5 I'm not kidding. Sounded like a cracking game to go to, but needless not majorly fussed. Nice to tick off another Isthmian ground off the list, onto Bury at home next on Saturday.

Imperial Fields has been the home of Tooting & Mitcham United since 2002 with the club previously playing at Sandy Lane in Tooting which was an all wooden facility. The ground's capacity is 3,500 with 612 seated. The ground was previously home to Chelsea Ladies FC in 2011. The ground is fairly near to Mitcham tram stop which is on the tram line from Wimbledon train station, which was the route I took. It took around 10 minutes from the tram stop, although I do believe Mitcham Junction train station isn't too far to walk either, according to Google Maps it's about a 20 minute walk to the ground. 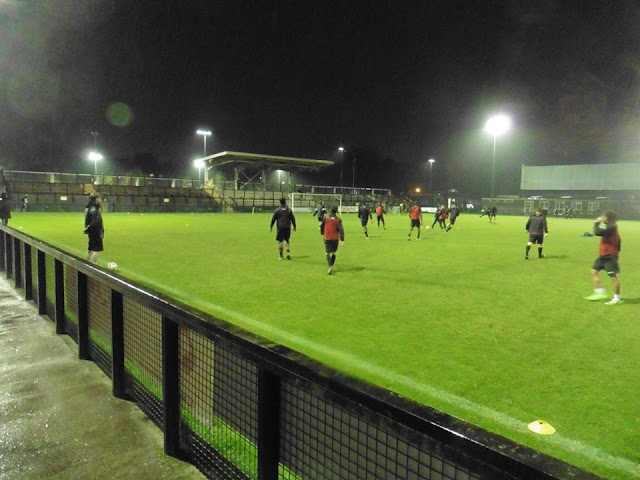 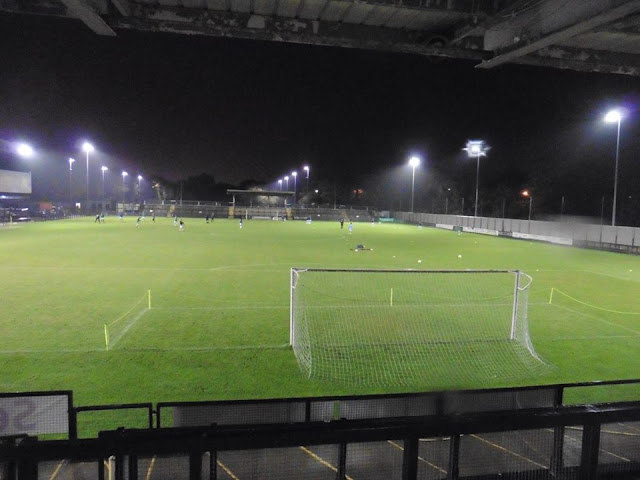 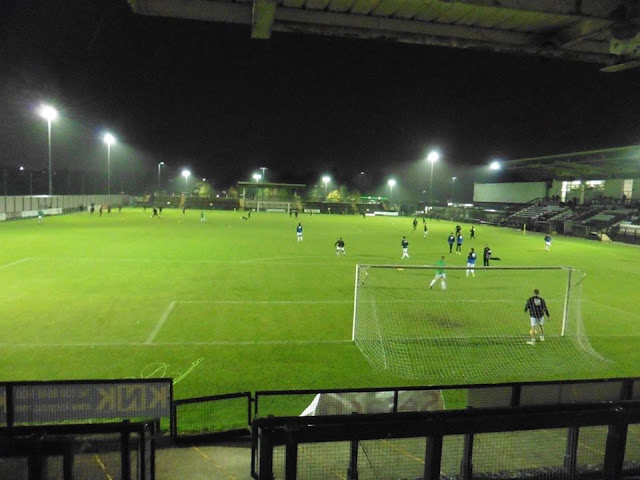 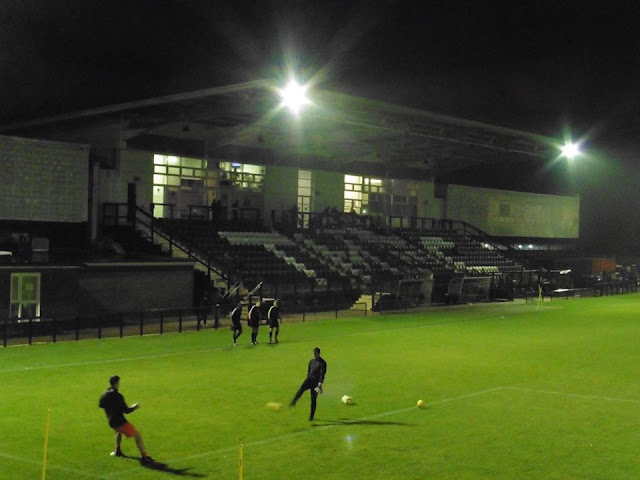 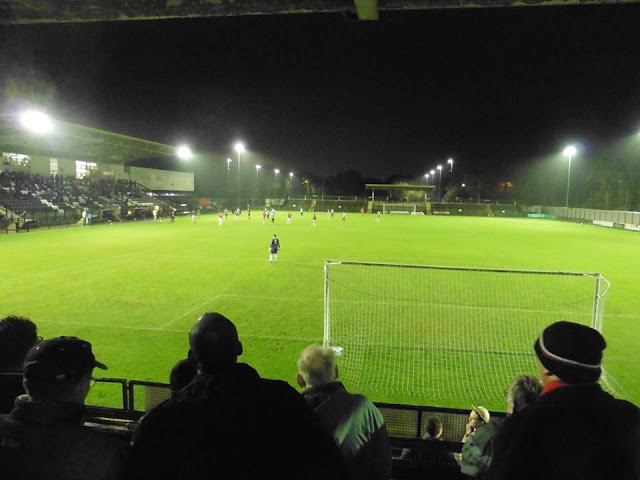 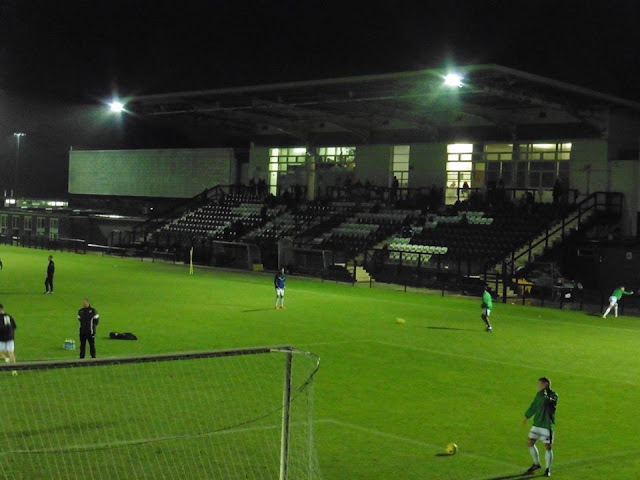 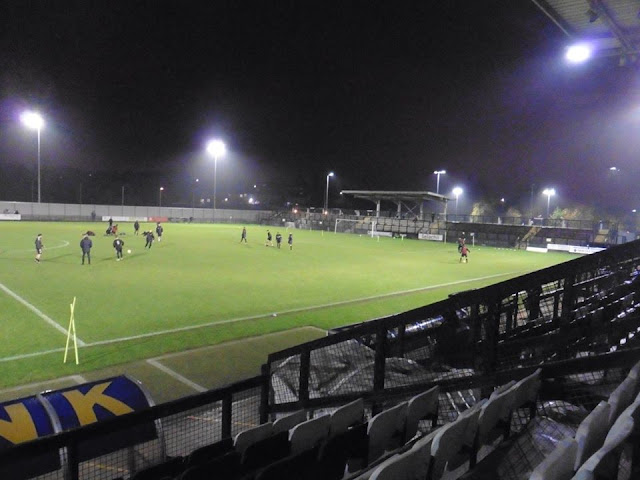 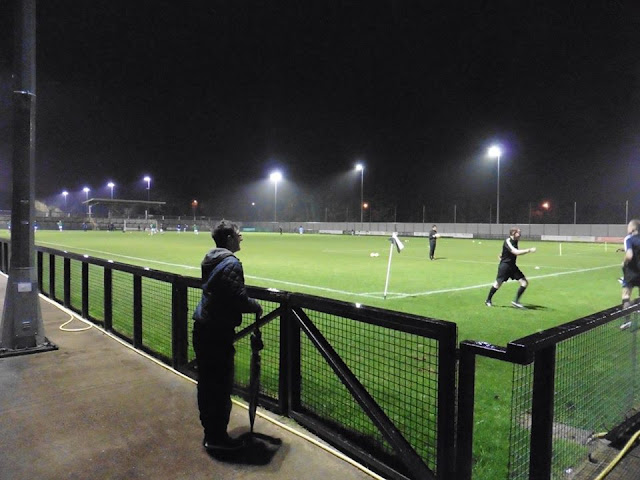 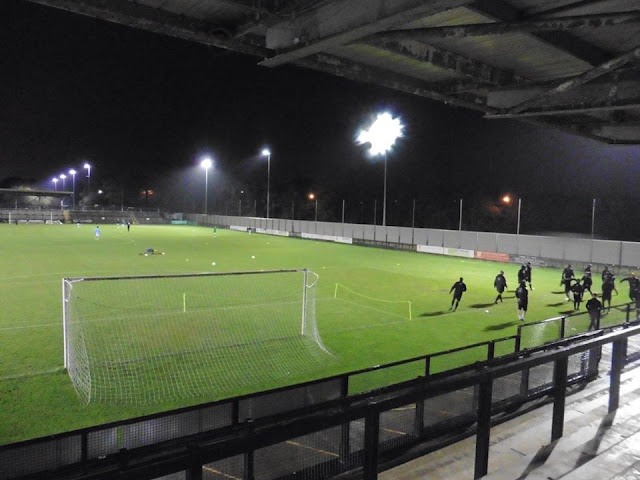 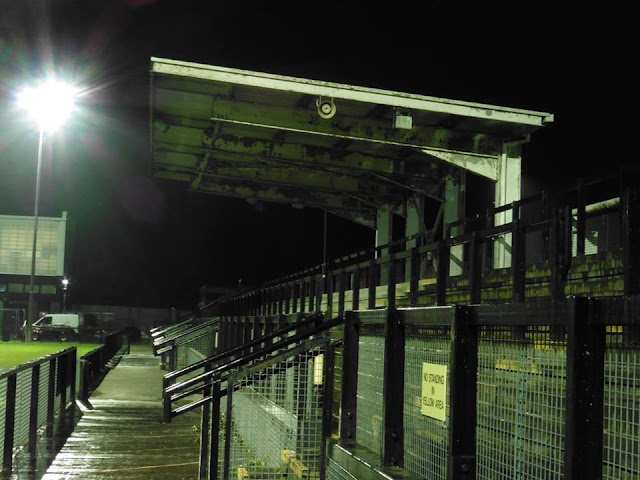 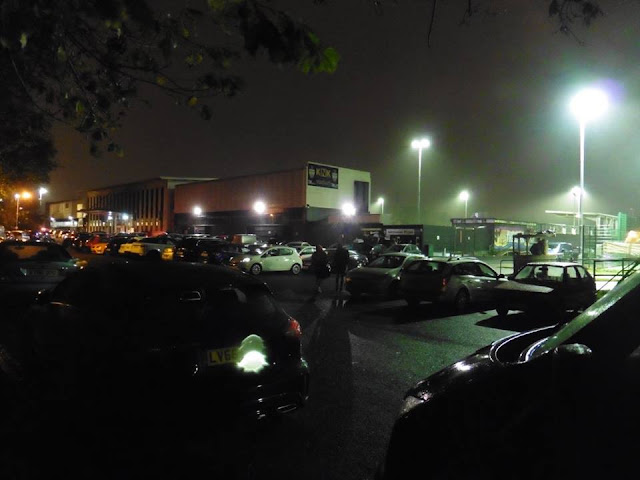 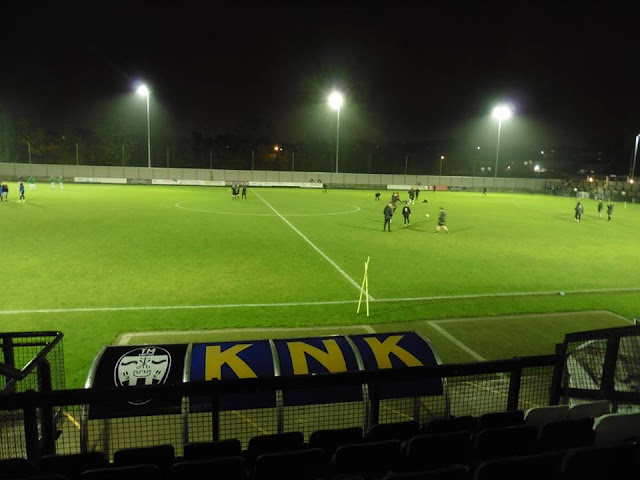 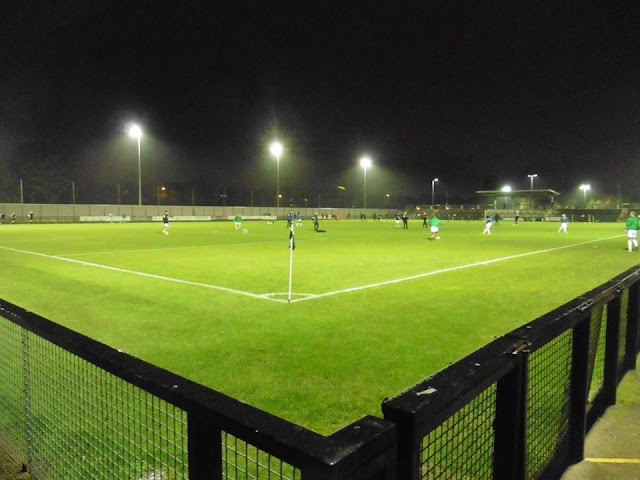 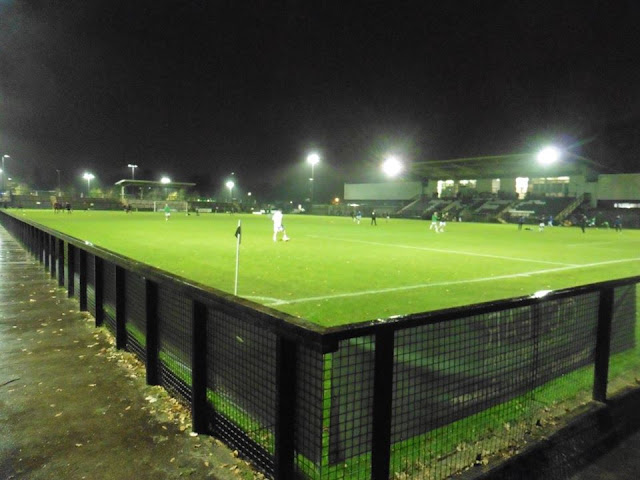 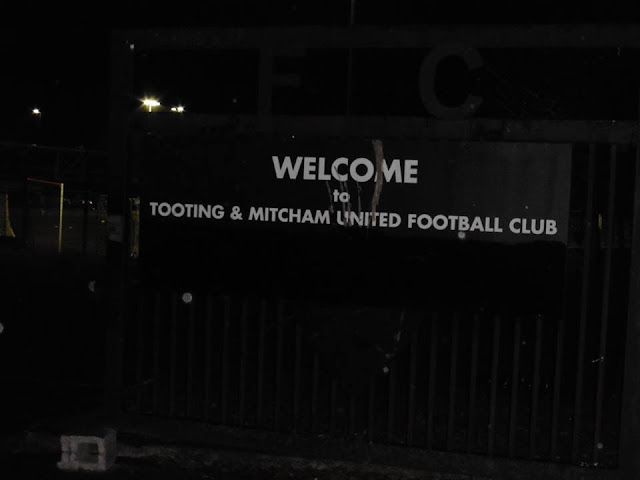 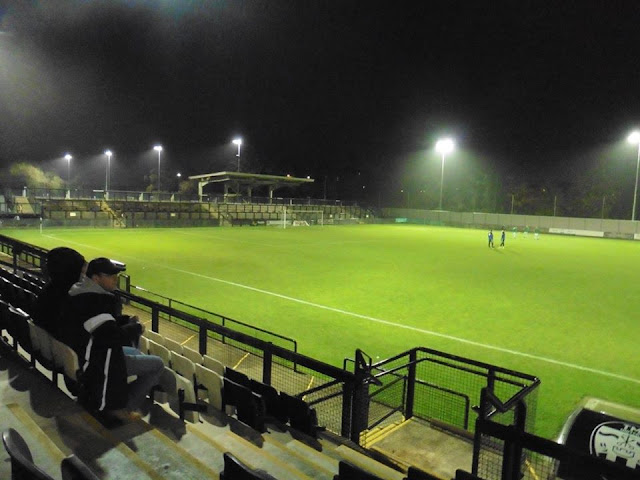 Posted by Football Grounds at 16:48