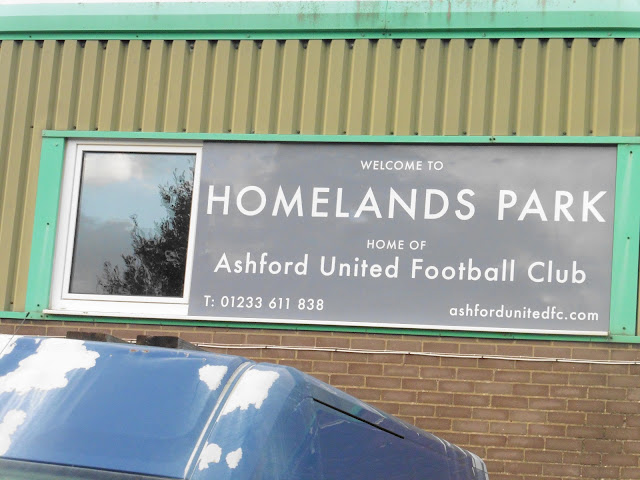 BRIEF HISTORY/FACTS ABOUT THE CLUB:

The roots of senior football in Ashford originate in 1881 with the South Eastern Rangers who played at Newtown Green (with dressing rooms in the adjacent Alfred Arms). The club reached the Final of the Kent County Badge competition (the fore-runner of the Kent Senior Cup) in 1886 and 1888 but lost on both occasions to Chatham. In 1891 the original Ashford United was formed when the South Eastern Rangers amalgamated with Kentish Express FC. Initially their home ground was at the back of the Victoria Hotel. About 700 people yielding gate receipts of £5 were present for 'United's' first match on 19 September 1891, a defeat by the Highland Light Infantry 1–5. Two weeks later the club played their first FA Cup match, an away first round qualifying tie in which they were defeated 6–2 at Crouch End. The club were founder members of the Kent League in 1894–95 with a reserve side playing in Kent League 2. The club relocated to an enclosed ground with a timber built stand at Godinton Road where the 1899 KCFA Cup Final was staged. Team colours at the time were black and white striped shirts. In early 1900 two Ashford players, Gilbert Godsmark and George Foley were transferred to Second Division club Newton Heath. The former of these players is notable as the first signed for a transfer fee by the club that was shortly to become Manchester United. The fee of £40 was payable in two instalments with half paid immediately and the remainder after satisfactory completion of a trial period. However, after scoring four goals in nine matches sadly, early the following year, Godsmark died of disease on army service at the Second Boer War – with Ashford reportedly serving a writ for the remaining £20. In 1958 a significant appointment for Ashford Town was that of ex-Leyton Orient and Southampton full-back Ted Ballard as manager. In his four years at the club would guide the 'nuts and bolts' to notable cup success. In the 1958–59 season the club (and for a second time a club representing Ashford) won the Kent Senior Cup. Kent League Ashford beat Southern League Tonbridge in the final at Gillingham. Ron Vigar scored both goals in a 2–1 victory with Tonbridge hitting the post from a penalty. The 1960–61 campaign saw the club's FA Cup exploits curtailed once again in the First Round proper with a 1–2 home loss (Town scorer: Joe White) to League club Gillingham. On the Gills teamsheet was forward John Shepherd who played for and skippered Ashford the following season. The cup run in that 1961–62 season was the next high-point in Ashford Town's history when the club reached the FA Cup 2nd round proper. After beating (then non-league) Wycombe Wanderers 3–0 (scorers Joe White, Ron Clayton & John Shepherd) in a First Round replay at Essella Park, the club lost 0–3 on home turf to Queens Park Rangers – playing for the visitors was Keith Rutter who would subsequently return to Ashford three years later to captain the team. In February 1964 the team recorded their record Southern League victory, beating Barry 10–1 with John Harris, Laurie Thompson, Bob Walker(2), Malcolm Collins, Paul Nicholas(3), Alec Garden and John Smith scoring the goals. For the 1982–83 season the Southern Premier Division was re-introduced with regional-based Southern and Midland leagues below. Ashford Town remained in the Southern Division and although ostensibly staying in the same league this was a slide down the football pyramid – now being in the third level below the Football League. Ashford had not played below at least the second level for 23 years. 1983–84 was a decent season with the club finishing in 8th position, whilst also reaching the fourth qualifying round of the FA Cup, before losing 0–3 at Barking. Ashford also got to the semi-final of the Courage Eastern Floodlit Cup, eventually losing to Stansted 2–3 on a penalty shoot-out after the sides had drawn a two legged semi-final 3–3. This was no disgrace a just a couple of weeks later Stansted lifted the FA Vase with a 3–2 win over Stamford. The summer of 2010 therefore marked the end of Ashford Town FC after a history of 80 years. During this time they had won only one League championship – the Kent league in 1948–49 but had enjoyed a few promotions and cup exploits along the way. Although relegation had usually followed shortly after the promotions the post war record of the team was that they had never for any season finished bottom of their League – albeit it was close on more than one occasion!

My 1st visit to the Homelands Stadium came in July of 2011. Gillingham had a pre-season friendly at Ashford United, so of course gave me a great chance to tick off the ground. I don't remember too much of the day, except we met a good friend of ours Jonathan at the ground, also a fellow Gills fan living in Ashford at the time. Photos I took were on my phone so not the best quality but since then I haven't had the chance of a re-visit to Homelands. My 2nd visit would come 9 years later in August 2020. 2020 would be a very odd year as I don't really need to mention as you can guess, but with the football season starting later and with some restrictions being lifted, fans with a limited capacity can go to non-league grounds. Luckily this gave me a great chance to re-visit Homelands again and also a chance to watch Gills under 23's. Kennington FC who are Ashford United's tenants would go on to win the game 3-0 but it was nice to watch some football again since March. 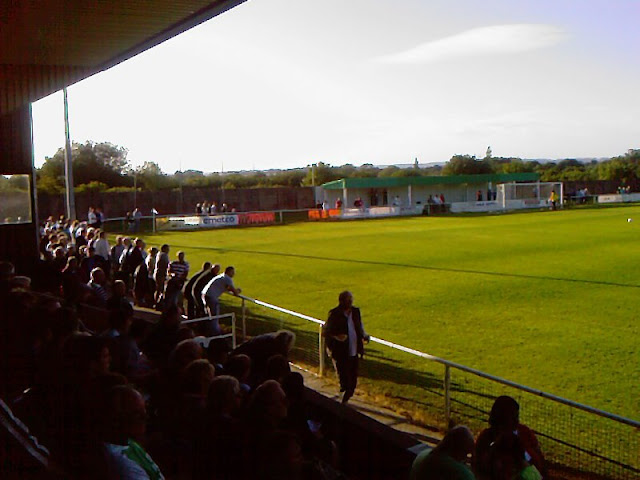 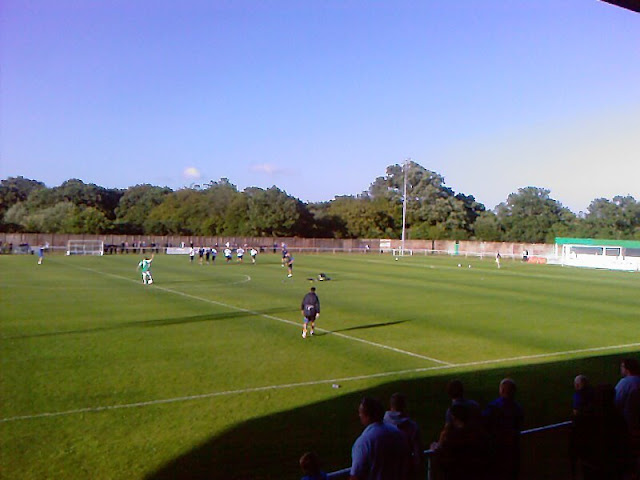 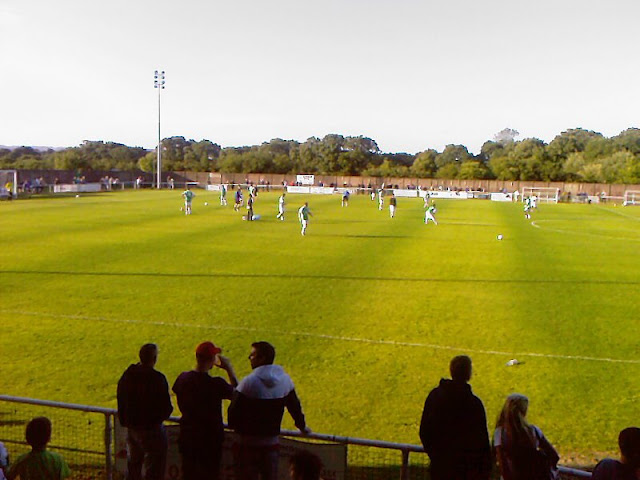 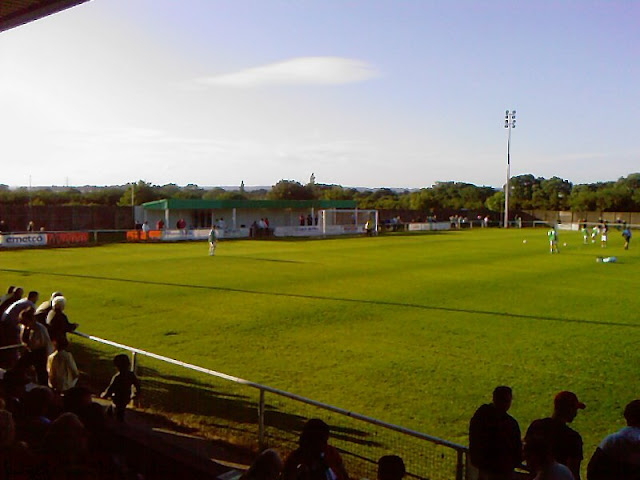 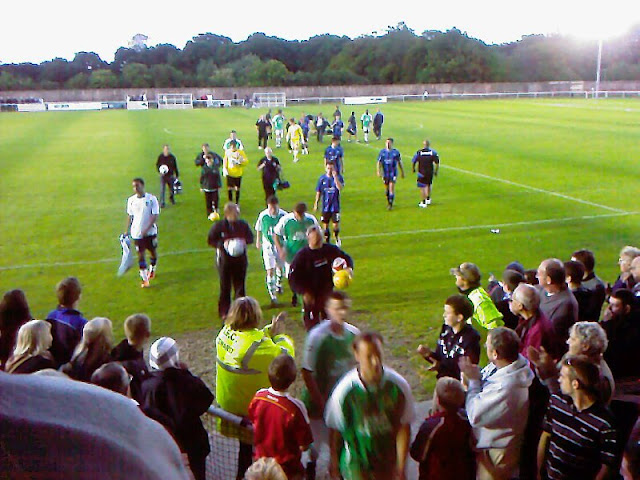 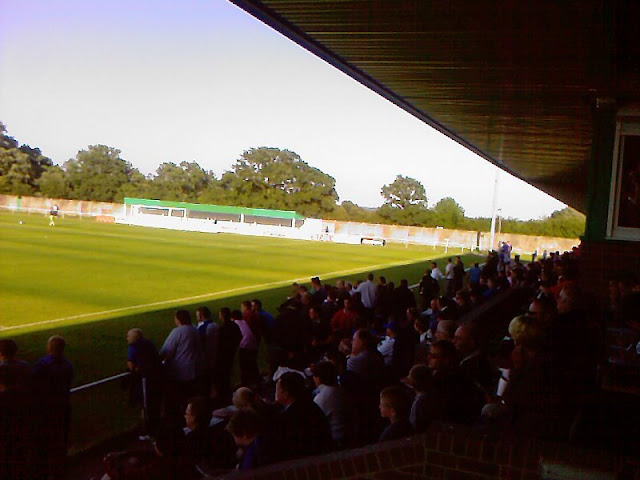 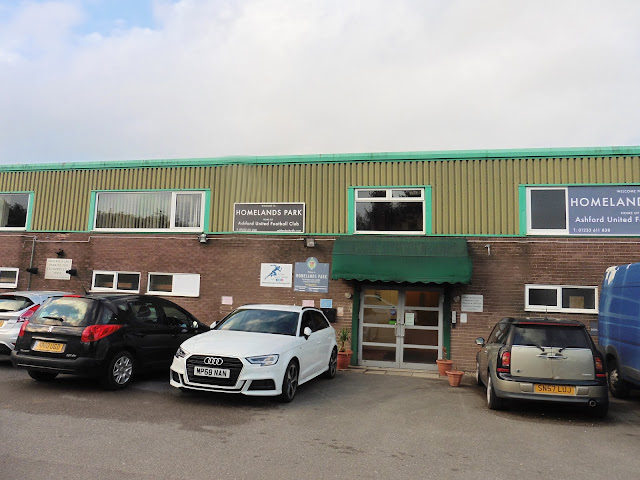 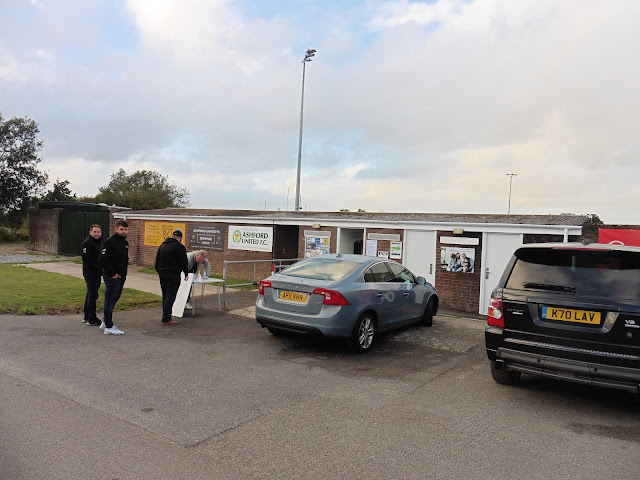 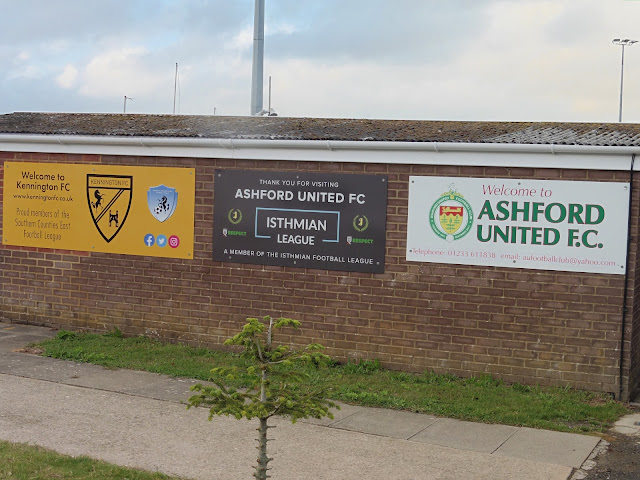 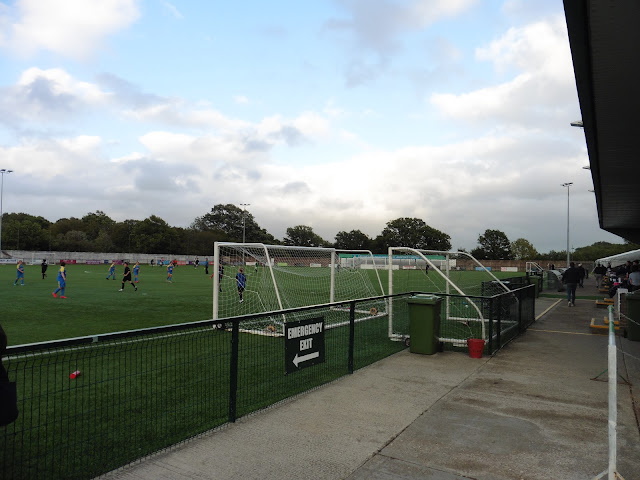 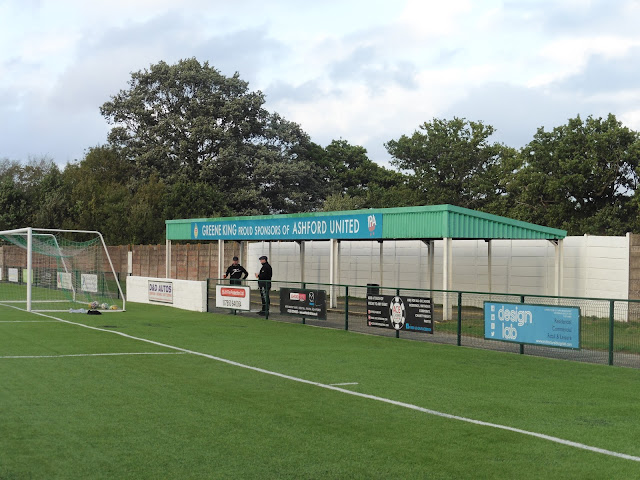 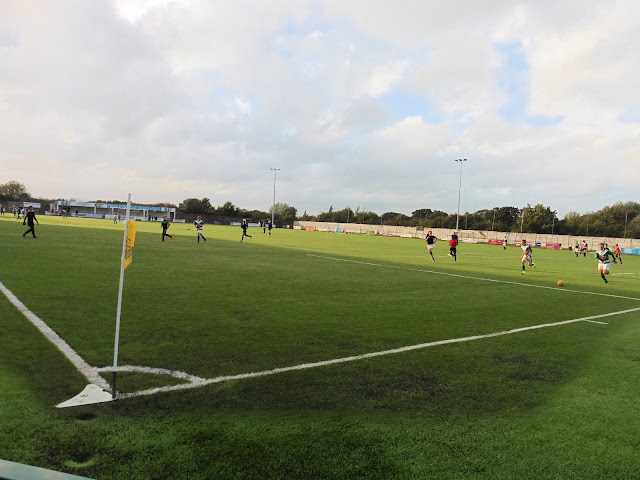 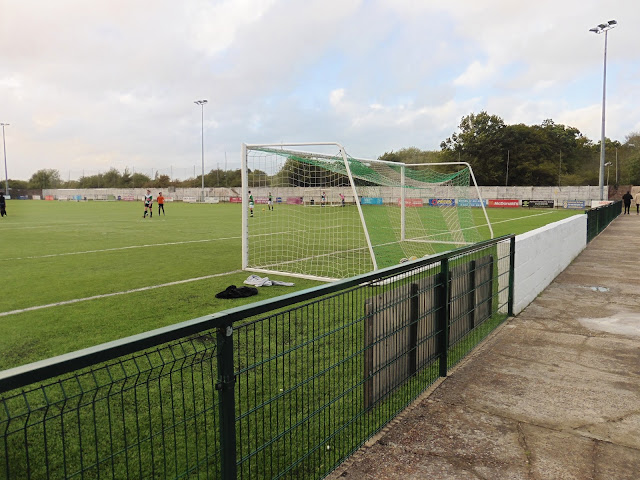 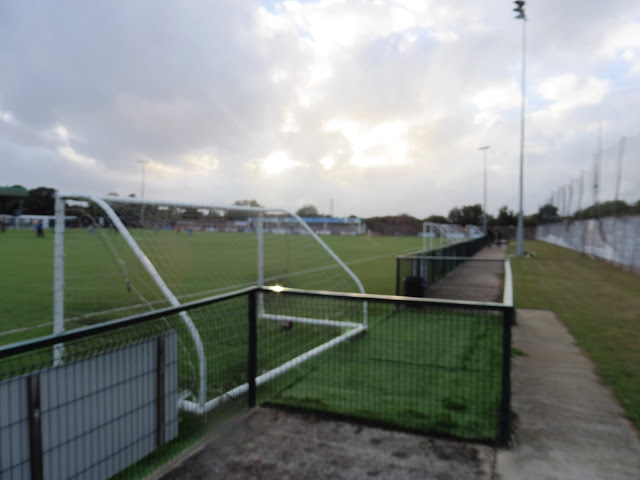 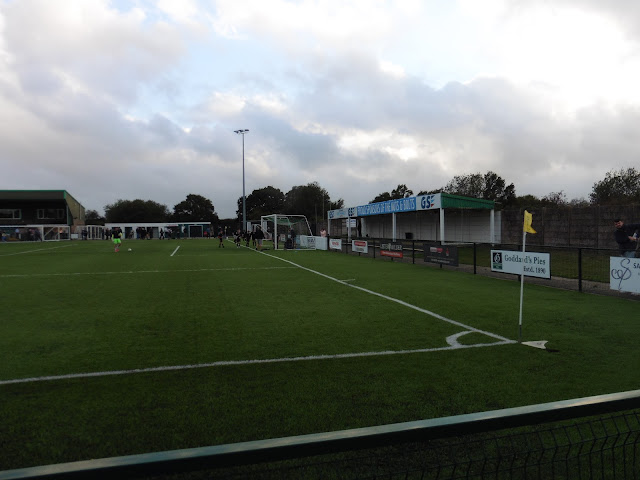 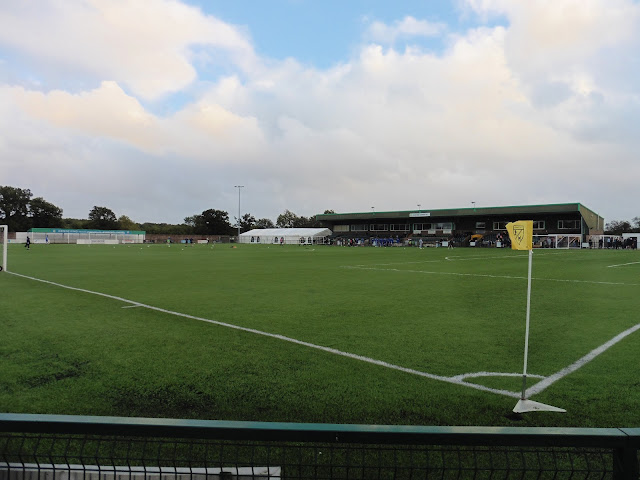 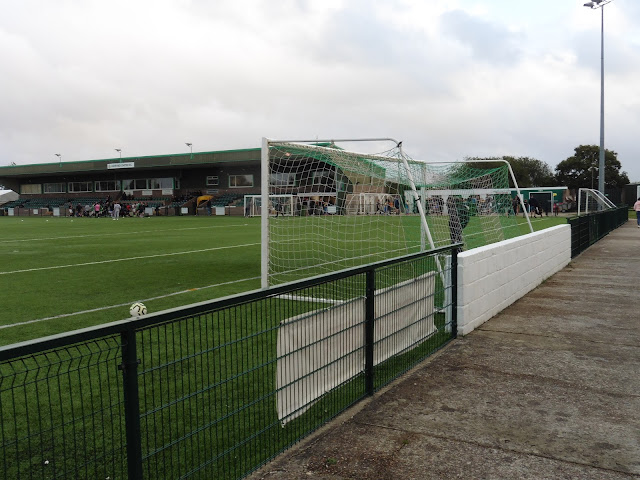 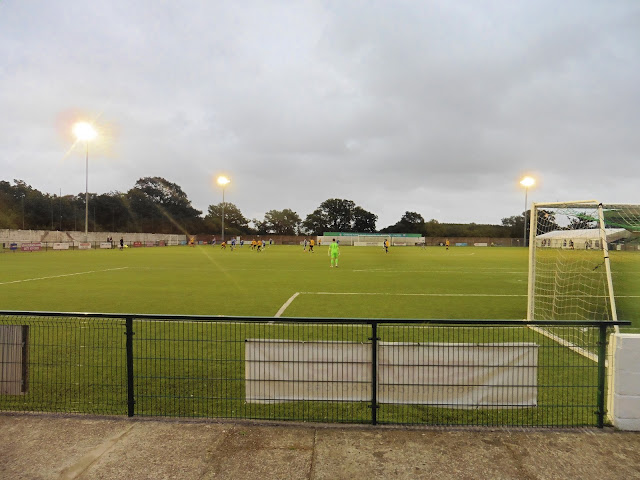 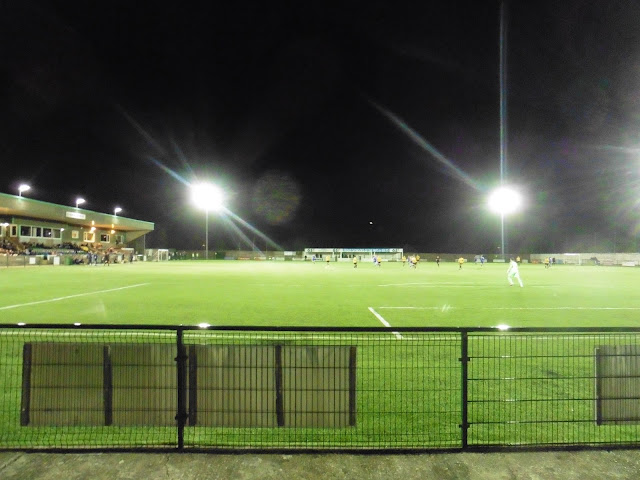 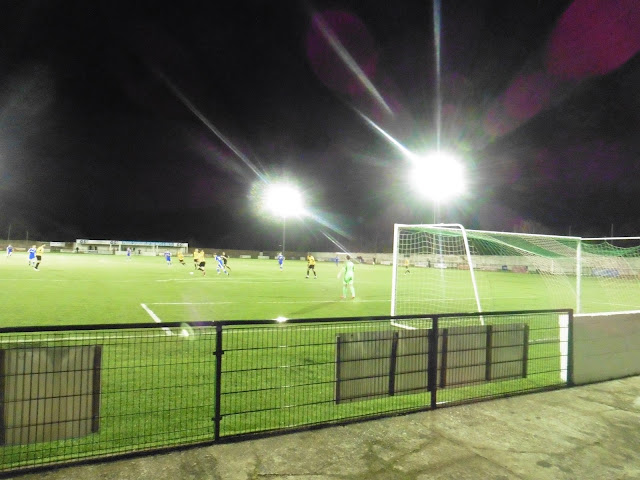 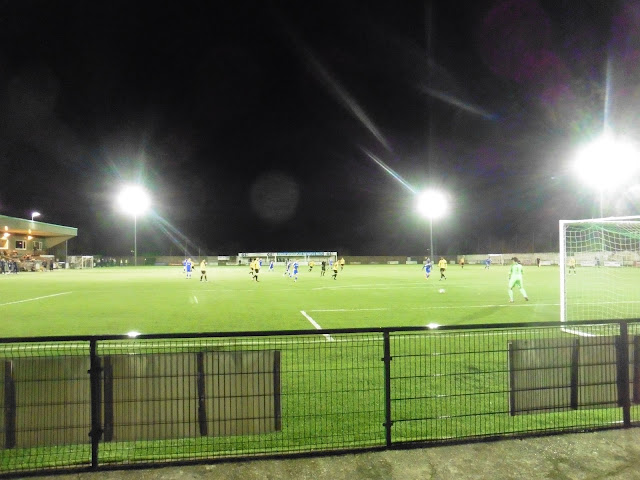 Posted by Football Grounds at 08:24