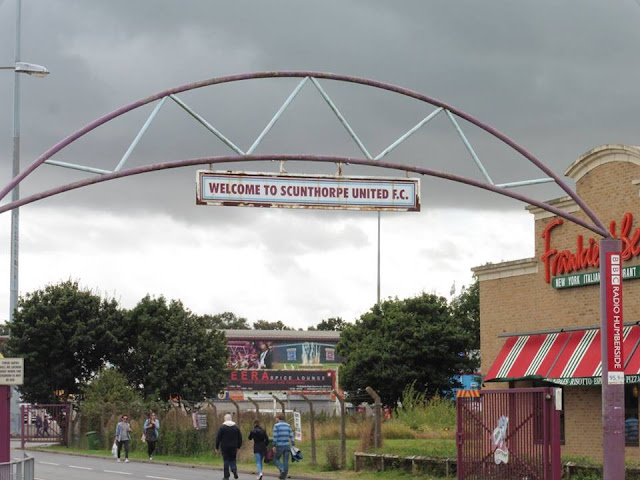 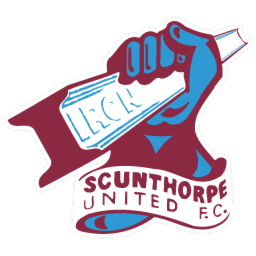 
Ah, Glanford Park. I've only ever visited Glanford Park the once, and this was the end of the 2014/15 season, this was one of the fixtures I was looking out for before the season started and I noticed that this was the last away game of the season, so I was glad to tick off Glanford Park off the list. The day itself was probably a day to forget with this one, I went up by train and did get quite pissed, eventually puking up at Scunthorpe train station when I got there. I do put my hands up and say it's my fault but the least we speak about it the better haha. It did get a bit more worse as the day went on as during the game, the weather decided to chuck it down and abandon the game for a bit, with eventually the game continuing on. Before I left for Scunthorpe during the week, I checked all the trains which were fine until I got back to Scunthorpe train station only to find the train leaving to Doncaster didn't exist or must have been cancelled which ended up me getting a taxi all the way back to Doncaster to make sure I didn't miss my train, but luckily got back in time to get my train. The station to the ground at least is a good 30-35 minute walk, so if you do plan to go by train, make sure to get in pretty early just to be on the safe side.

My 2nd trip to Glanford Park, was probably arguably the longest trip it felt like. I was thinking about doing this one by train again, but decided against it due to it nearly being a disaster with the trains on my first visit to Glanford Park, so opted to coach it instead. Oh and also it's a bit of a pain to get to Scunthorpe by train anyway. So, I was awake by 6am and left home not shortly after. Left the next stop I live just after 7, which got me into Strood just before 8, another train to Gillingham and then got on the coach which left at 9. So, we're on our way on a 75 seater coach with about 15 of us on it which was quite funny, but always enjoy a 2 seater to myself which I could have a kip so not too bad. Had a kip before getting into Peterborough Extra Services and grabbing a bite to eat before heading back on the coach. Unfortunately seeing the Aldershot team coach and fans at the services as well which didn't really put a smile to my face put it that way, but then heard that they had Lincoln, so wasn't too surprised to see the Aldershot players coach and fans there. So anyway, got into Scunthorpe just before 2. Game itself, I would say the worst game I've probably seen watching Gillingham play. Yes we didn't lose, but watching a 0-0 draw with 1 shot on target all game, made me feel like watching paint dry. Anyway, after the game I jumped back on the coach, another quick stop off at Peterborough services on the way back and got back to Gillingham around 9.15. Got home after 10ish after a long knackering day.

Well, as it says in the title, quite possibly the nightmare day! Which I will explain in a bit. Anyway, even though I wasn't greatly keen on doing it by train, it was a choice of Scunthorpe on the train or Shrewsbury away the week later by train. I opted for Scunthorpe in the end, both journeys are quite a pain in the arse by train, but I wanted to do at least 1 of them by train as I prefer away days by train anyway, so decided to go with Scunthorpe. Not that it was the price difference or anything, just mainly train journey wise. So anyway, I woke up by half 7, quickly got ready and left home at 8.15. Was a bit annoying as I left home and had to get off at Tonbridge to get a train to London as there were planned engineering works between Tonbridge and Sevenoaks which didn't help matters much but it wasn't too bad in the end. Anyway got into London just after half 9 and got the tube to Kings Cross in order to get my train, the 10.48 from Kings Cross to Doncaster. Got into Doncaster around 12.15, and then left around 12.40 and got into Scunthorpe shortly after 1. After the club mucked up with the ticket as I ordered a ticket over the phone and when the post came, I did receive something from the club, but it wasn't the ticket, it was a receipt for a ticket, so I sent it back and then heard that the club were sending my ticket up with the official supporters coach and had to pick it up at the ticket office. So anyway, picked my ticket up at the ticket office so wasn't too bad. I did fear I had to pay again on the day but wasn't to be. Anyway I got to the ground just before 2. Anyway onto the game itself, erm yeah. Probably not too much to say expect for, we got trounced by Scunthorpe United for Christ sake. Then again, fair play to them, they deserved it anyway, but I felt that, with the side that Justin picked, we went there for a draw. We had no right back so instead we picked youngster Josh Pask on loan from West Ham at right back which fair play to the lad, he gave it his shot, but he isn't a right back, he's a centre half. I was disappointed to hear afterwards that our right back Ryan Jackson picked up a groin injury which I'm starting to feel he's an injury prone player, but a good decent right back. Erm, also I feel now as well is to drop Nelson, I love the bloke and his passion, but lately he has done so many mistakes and I feel that we should drop him just for a few games maybe (and to order some new gloves) and give the lad Hadler a chance, a promising upcoming keeper. But yeah, a 5-0 drumming by Scunthorpe which did ruin the day but not just that as well, after the game, it decides to rain once again in Scunthorpe (in all 3 visits I've been, it's rained everytime) and considering the train station to the ground is a fair walk, yeah I kinda got drenched. And I was only wearing a hoodie as well which didn't help. But yeah I left Scunthorpe just after 6 and got back to Doncaster by 6.45. Had a bit of time to kill as my train didn't leave Doncaster till half 7, so I went to McDonald's which was a 5 minute walk and grabbed a bite to eat. Anyway I left Doncaster at half 7 and got home eventually just after 11pm. Just a shame the result ruined the day, but roll on Watford away on Tuesday in the EFL Cup. 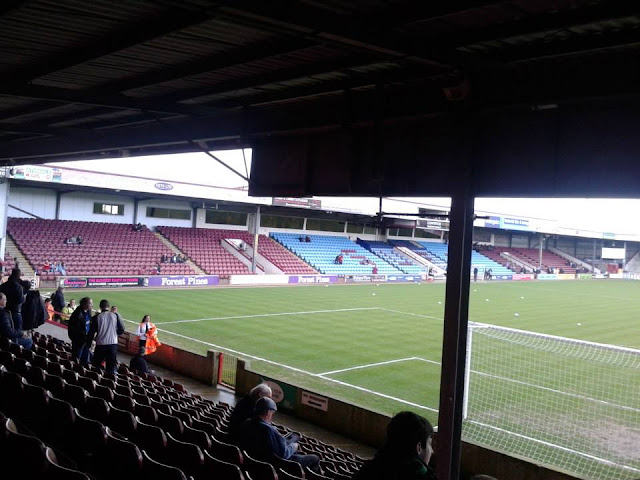 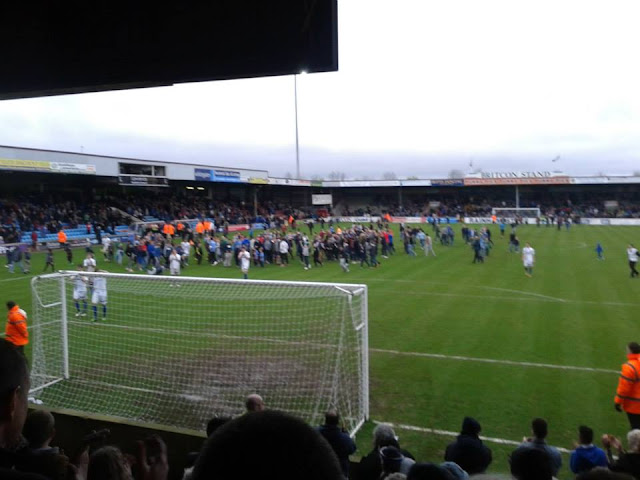 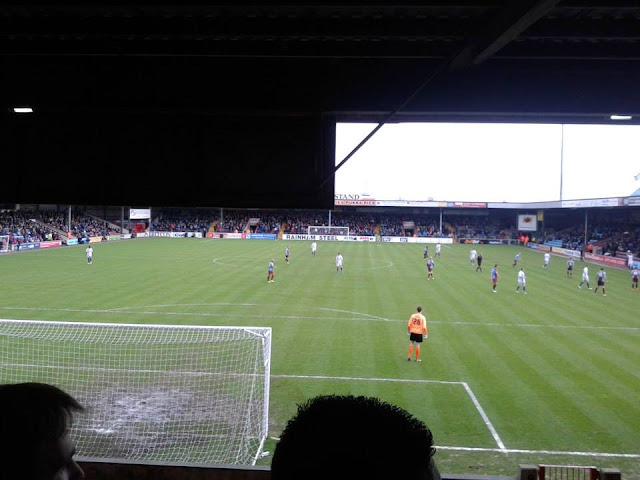 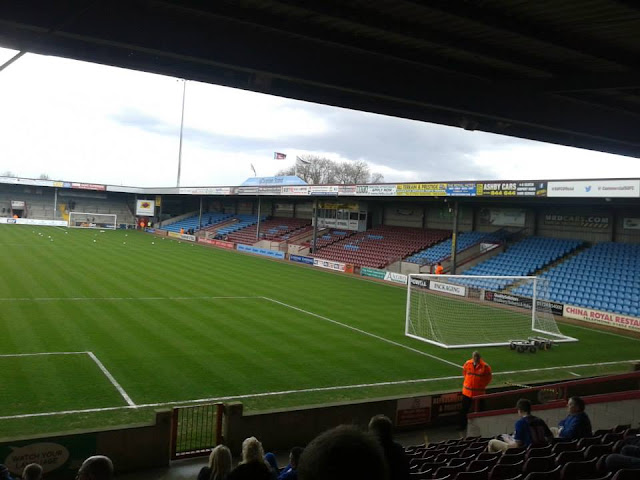 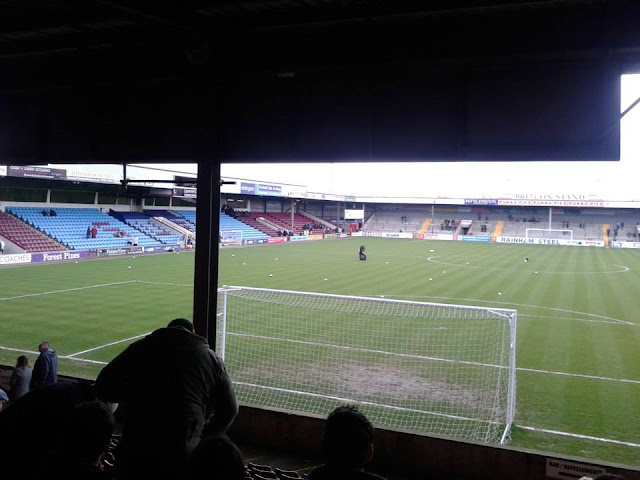 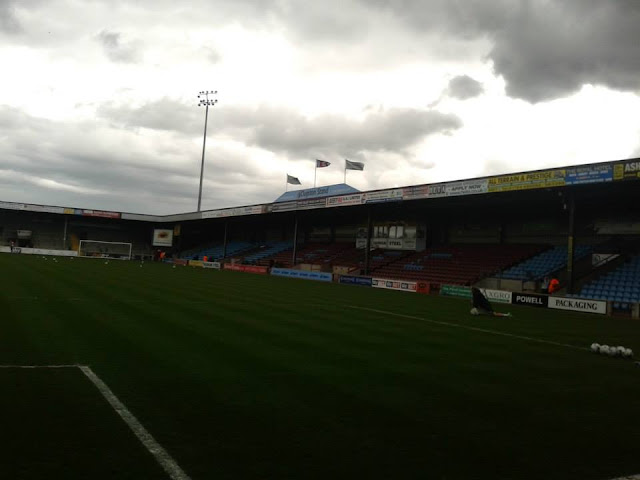 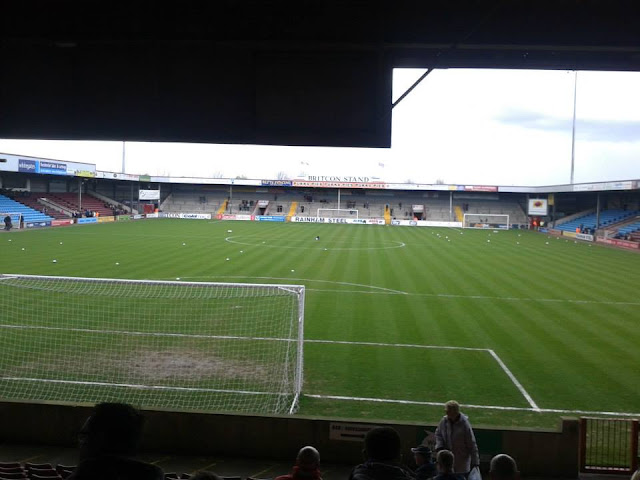 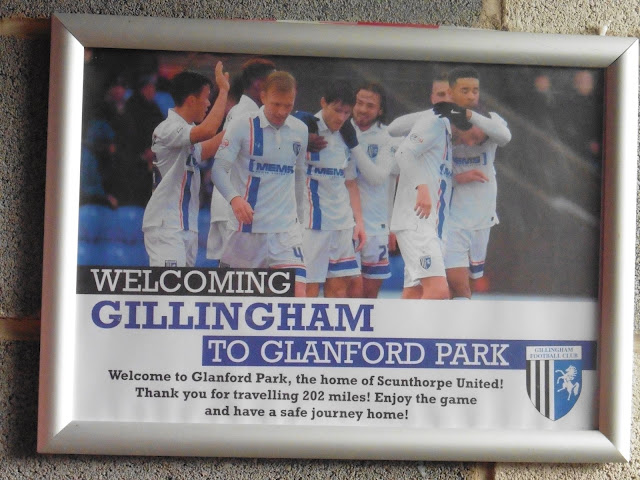 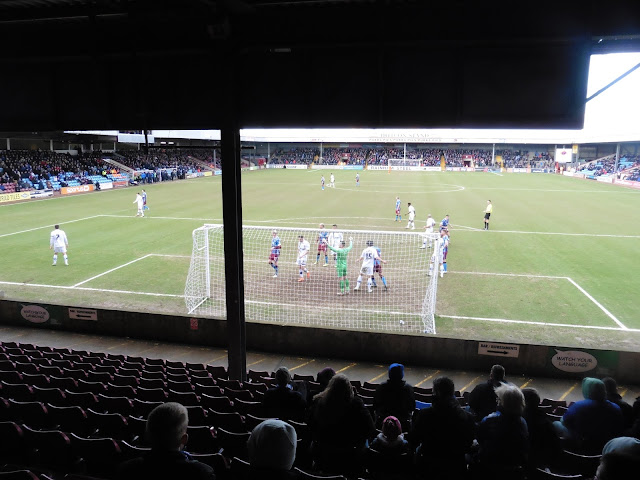 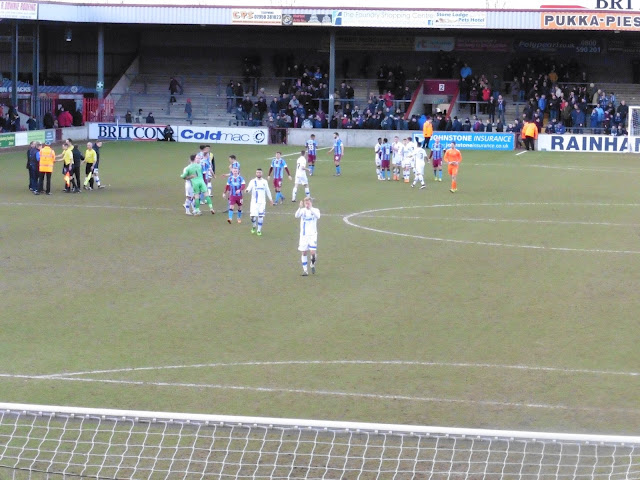 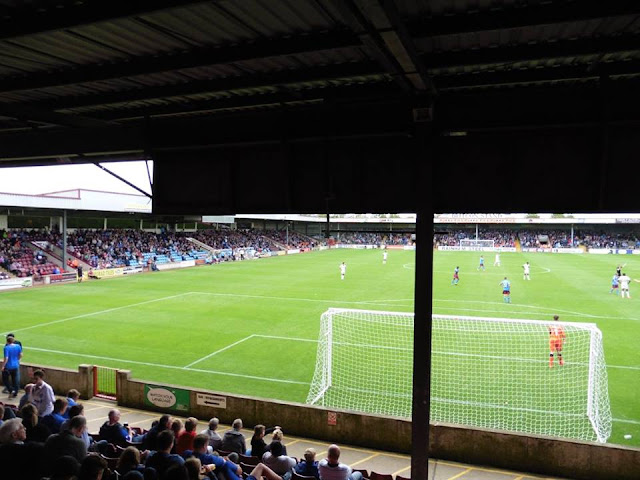 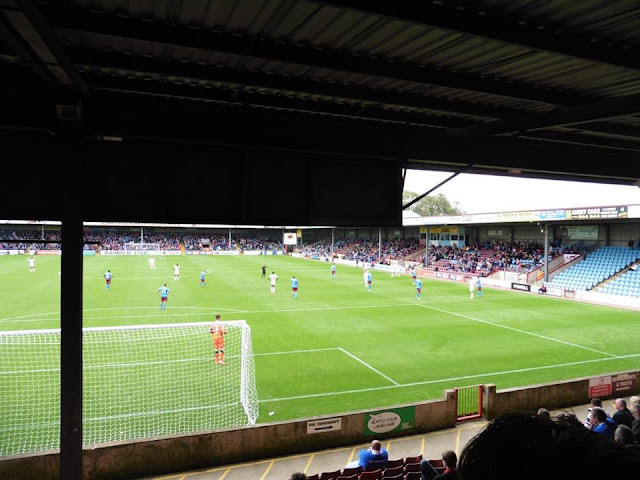 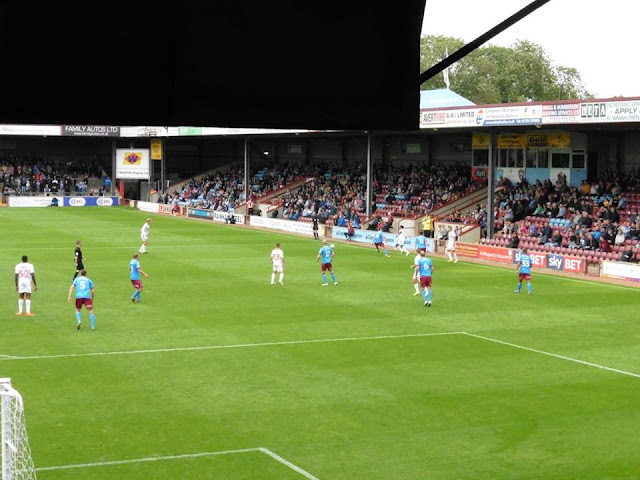 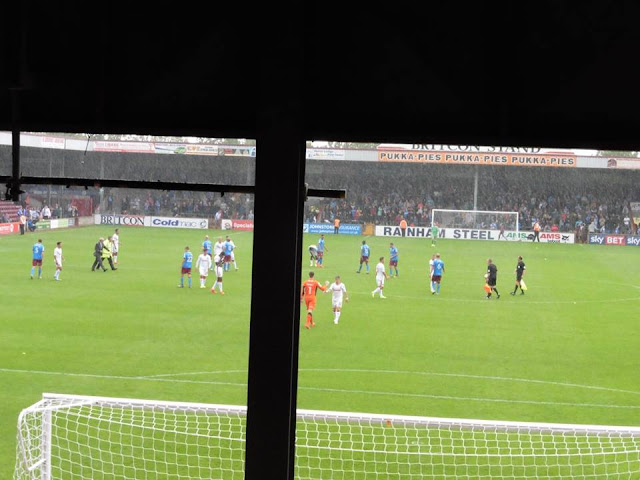 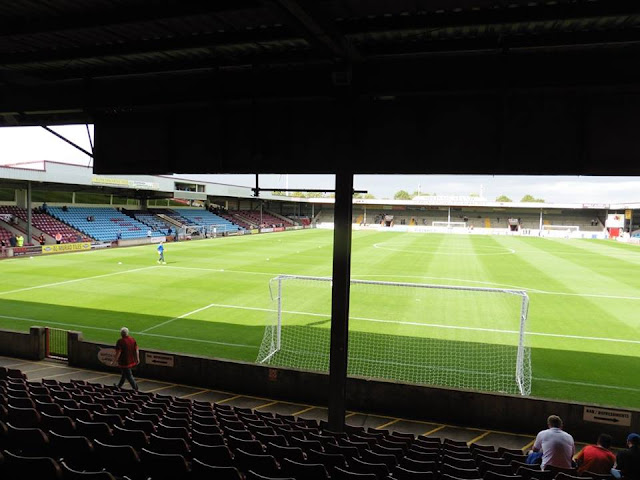 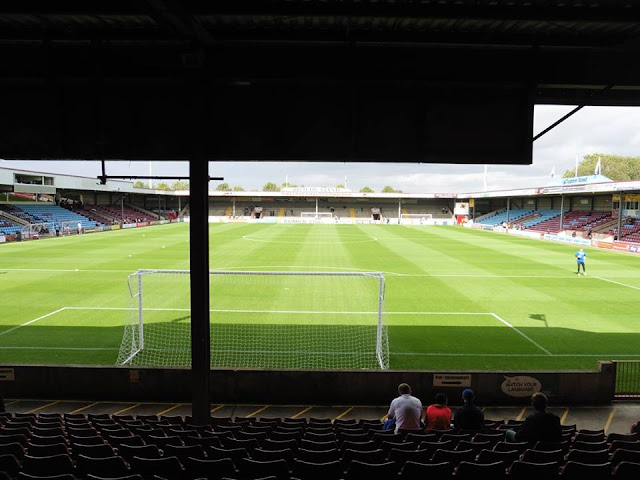 Posted by Football Grounds at 16:51