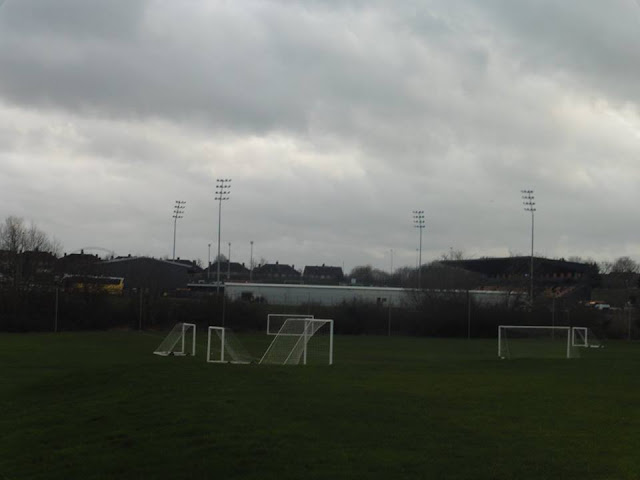 
FIRST VISIT TO THE HIVE:

My only visit to The Hive so far was in the New Year of 2016 as before 2015 came to a close, I found out that Gillingham's match with Wigan away got moved on the Thursday before due to Sky Sports moving the game which buggered me on ticking off Wigan. So I couldn't go to Wigan in the end due to travel, and costing quite a lot of money to stay over so decided to become an armchair fan for the night and watch the game on TV. As a result of Gillingham's game being moved, obviously then it gave me a free Saturday, so had a quick look to see what games were on. I noticed Barnet were at home, so opted to go to that as before Christmas I was debating whether to go to Barnet or Portsmouth but opted for Portsmouth instead, so this time around I decided to go to Barnet as it was a fairly short trip into London and not so far from the tube either. Anyway I left home around 8 and went a trip down memory lane as soon as I pulled into London. Decided to get onto the tube on the Northern Line and head for High Barnet tube station as that's near to Barnet's old ground Underhill before they moved to The Hive in 2013. I do have good memories of Underhill as I went there quite a few times before Barnet left Underhill, all the times I went, I'd never seen Gillingham lose there. I couldn't make the last ever trip to Underhill with Gillingham as I was on holiday at the time, but my last trip there was memorable, a 2-1 win with Charlie Lee and Chris Whelpdale getting the goals, our 2nd away win in a week after going a whole season before without an away win. Certainly was a good night. Anyway on my re-visit to Underhill, it was nice to see the stadium in existence, although when I was looking through the ground, noticed the grass was quite fairly long, but pleased to see the ground still exist though, but then when I got home later on, only to hear that Underhill is meant to be demolished in 2017 to make way for a new school, so will wait to see if it happens. Anyway, after I took a trip to Underhill, then I got back on the tube and headed for Wembley, as I booked a Wembley tour online a couple of nights before, as I'd never done a tour of Wembley before although I've been to Wembley for games several times and I did enjoy it, although probably wasn't the best tour I've been on, but I'd recommend it if you're on a day out in London. After that, I headed for Barnet as it only took 10 minutes to Barnet. Was a good day out in all, a nice little ground is Barnet, was impressed. Nearest station to The Hive is Canons Park on the Tube, around a 10 minute walk.


My 2nd visit to The Hive came about when in around June time of 2016, Gillingham announced some Pre-Season Friendlies, 2 in London which of course 1 of them being Barnet. I was quite happy with this as even though I had previously ticked off Barnet earlier on in the year back in January, I had yet to see Gillingham play at The Hive, so was pleasing to hear. Anyway after it had been announced, me and a good mate of mine Dave were talking about possibly doing a Wembley tour before heading off to Barnet. This of course, I had previously done a tour of Wembley before especially as my 1st trip to Barnet was I did a tour of Wembley before going to Barnet, but as my mate Dave hadn't done a tour of Wembley before, thought it would be something to do before heading off to The Hive. Plus I quite enjoyed the tour of Wembley anyway. Anyway, onto the day itself, I left home just after half 8 in the morning, I left half an hour early due to lately the trains being delayed or cancelled, and I didn't want to risk the chance of getting the 8.56 train in order to catch the 9.11 train from Paddock Wood to Strood, knowing my luck it would have gone tits up, plus what with SouthEastern trains being delayed/cancelled lately, I wasn't willing to take the chance. Anyway I got into Strood just before 10 and met up with Dave shortly afterwards. Got into London after 11, and took the short tube ride to Wembley, and did another tour of Wembley. I quite enjoyed it and I think Dave did as well. Was quite funny as well as the guy that done our tour realised we were Gillingham fans, and said to us "It must be the Gillingham fan group as we've had a lot of Gillingham fans at Wembley lately doing the tour" well, what can we say?! haha. Anyway after we done the tour of Wembley, we grabbed a bite to eat at McDonalds, then getting back on the tube to Barnet. Once we got to Barnet, we headed off to the ticket office as we didn't have tickets on the day, when we were queuing up, a woman came up to us with a free complimentary ticket from Luke Norris, would we like one? So couldn't turn down the chance of a free ticket and free access to The Hive Bar (I didn't get anything there anyway) so saved myself a tenner and probably a good job in the end as well haha. The game itself, well it was nothing special really, we lost 2-0 but a lot of fans will say we've lost against a side below us in the Leagues, but it's a nothing game, friendlies don't necessarily mean a lot, I think it's all about fitness personally. We looked good with the ball, but no end product. But like I said, I wouldn't be too worried at this stage. Overall a good day out! 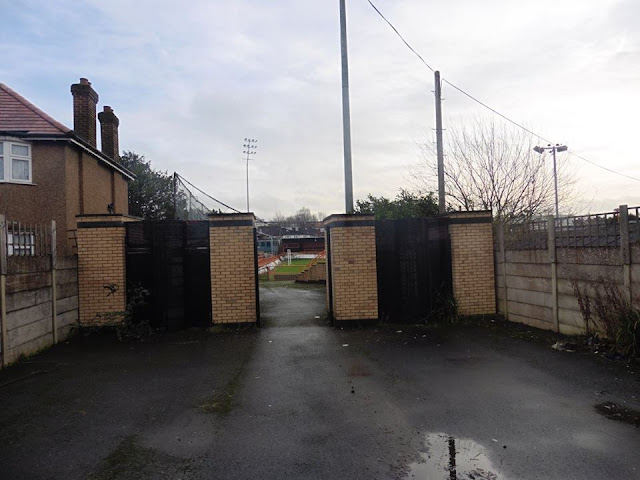 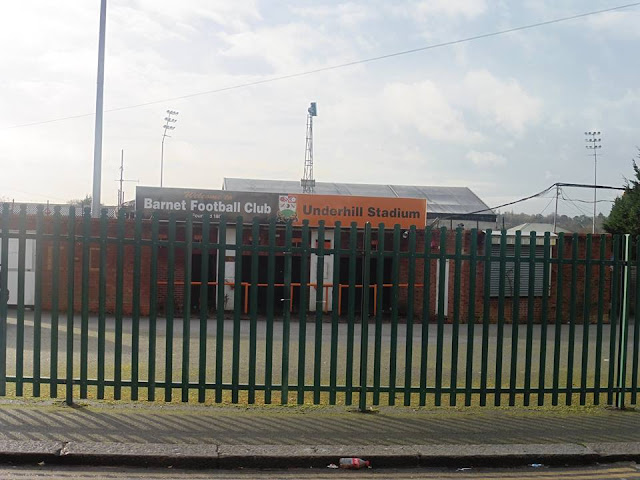 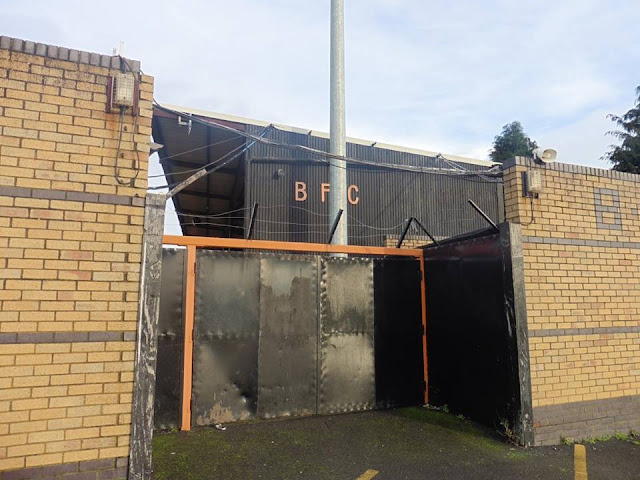 Barnet's previous ground Underhill, still in existence to this day. (These were taken January 2016) 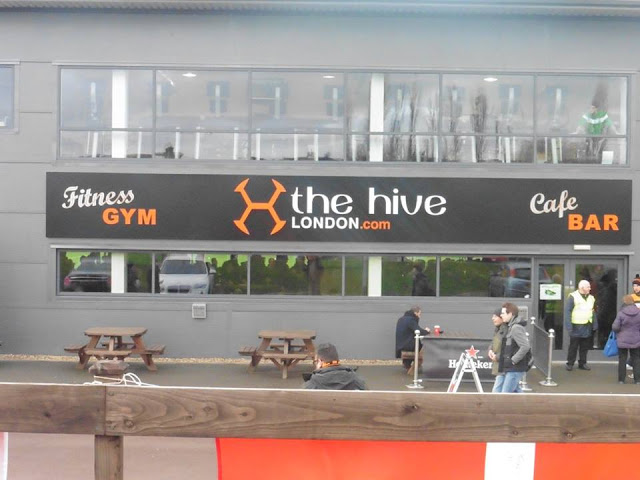 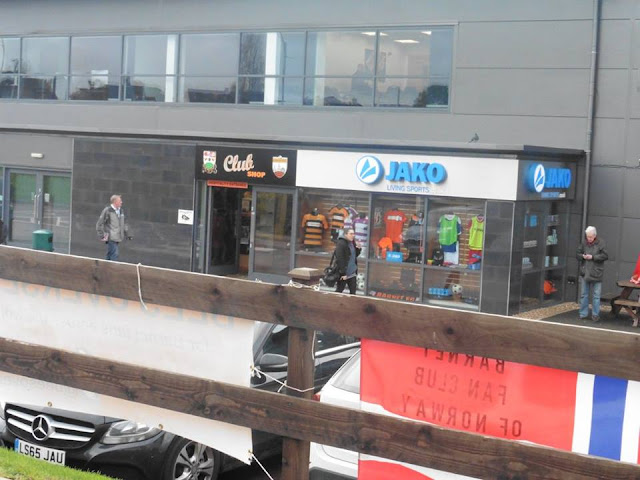 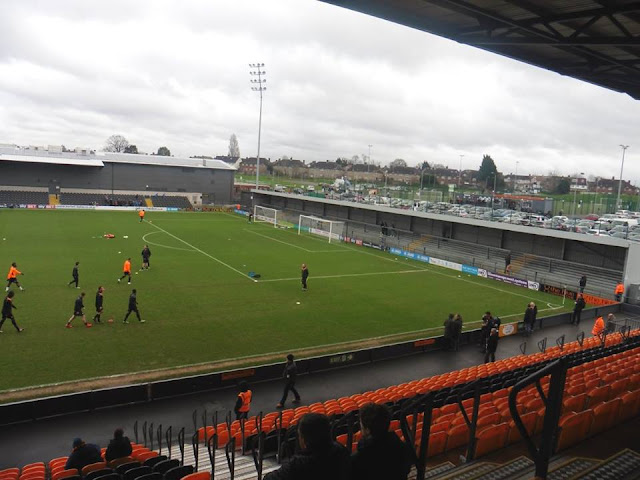 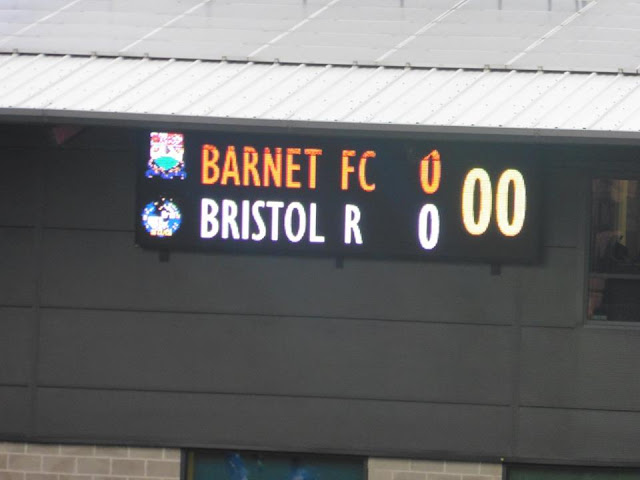 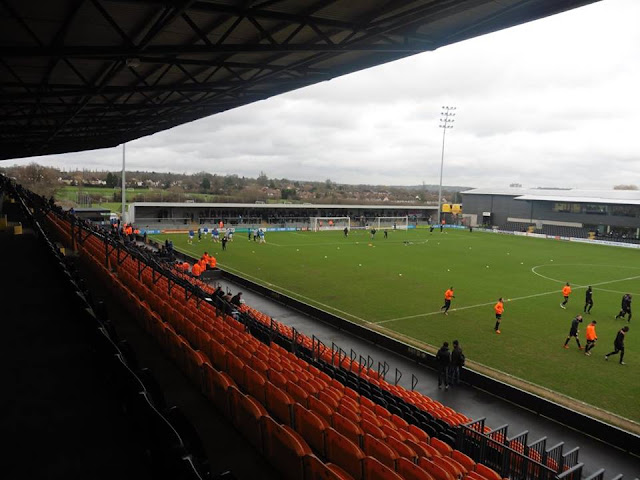 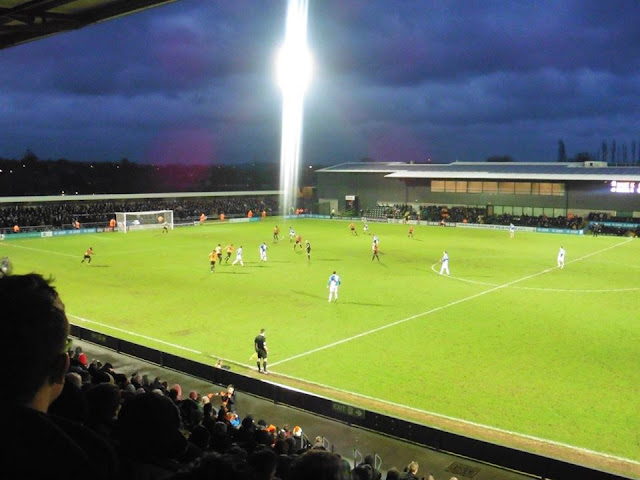 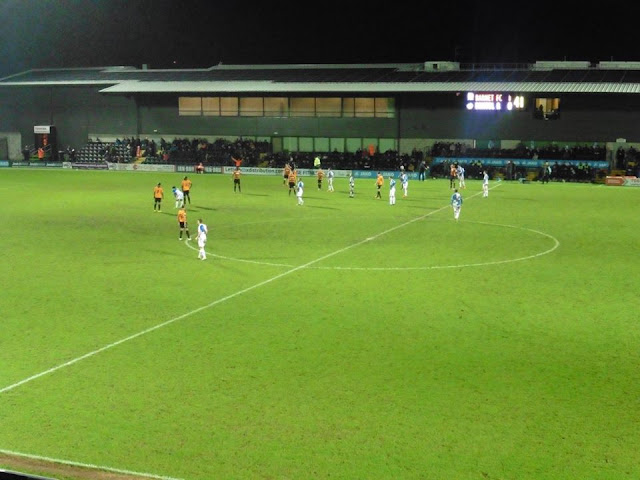 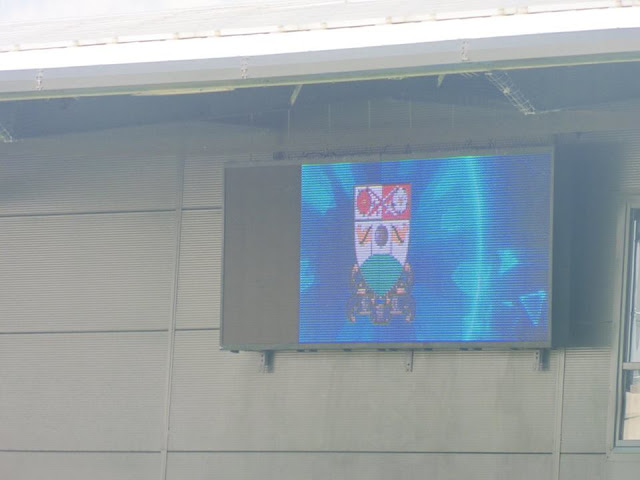 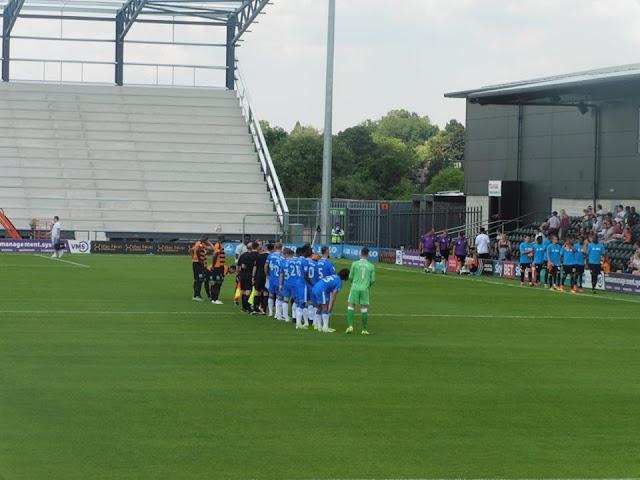 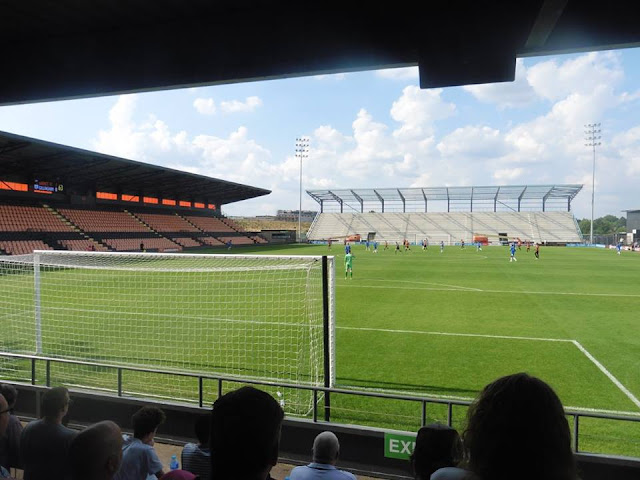 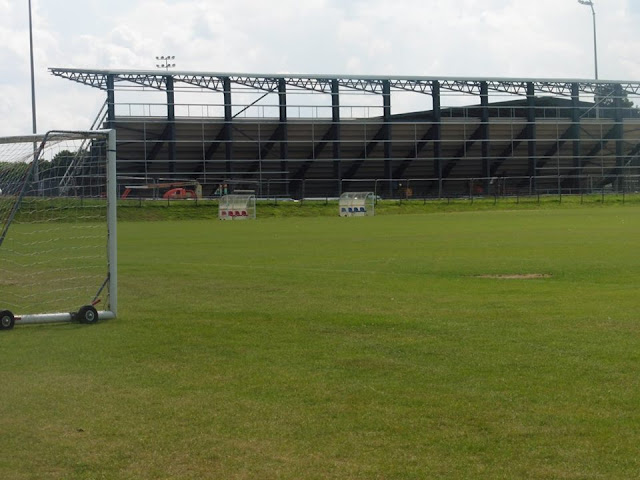 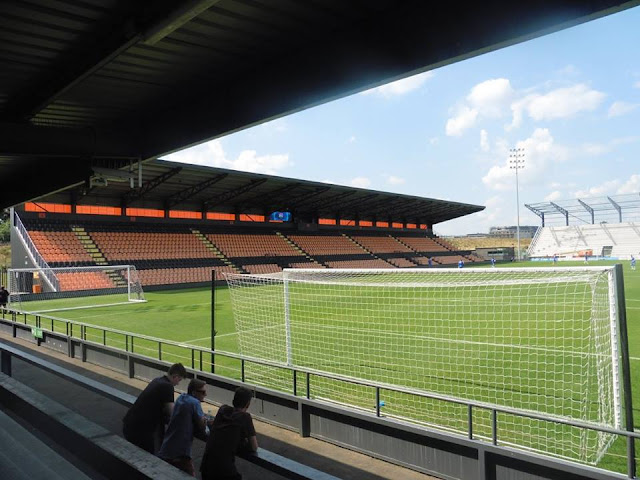 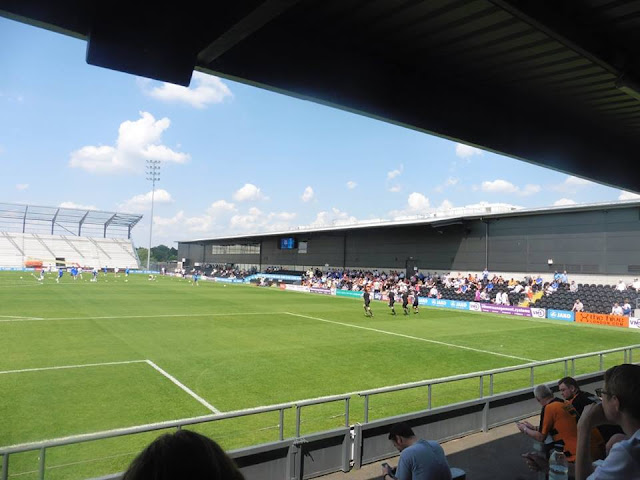 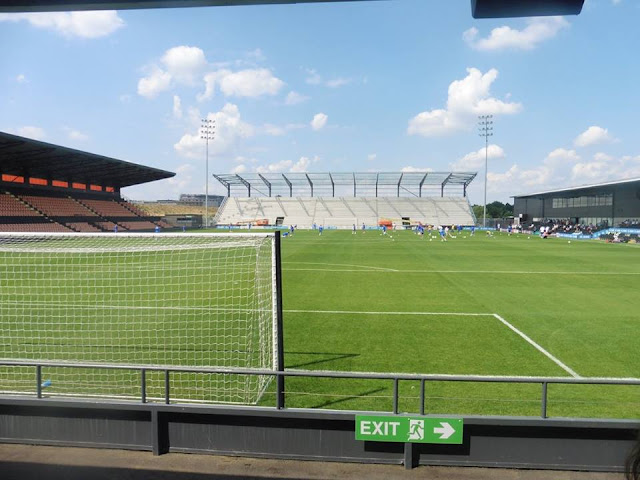 Posted by Football Grounds at 18:45