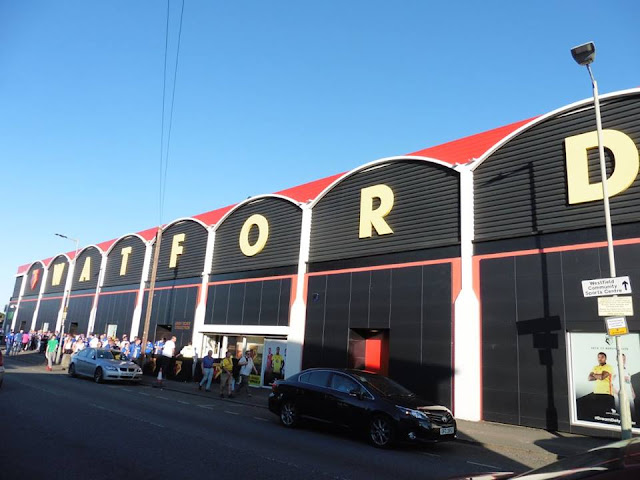 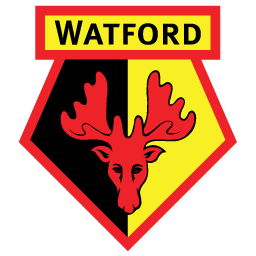 HISTORY/FACTS ABOUT THE HORNETS: 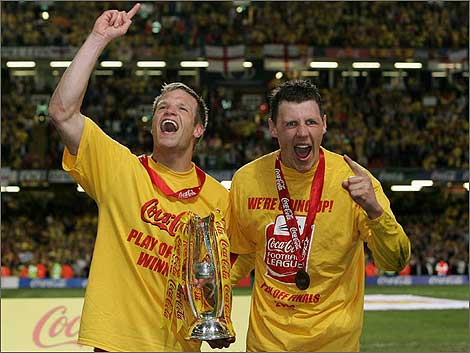 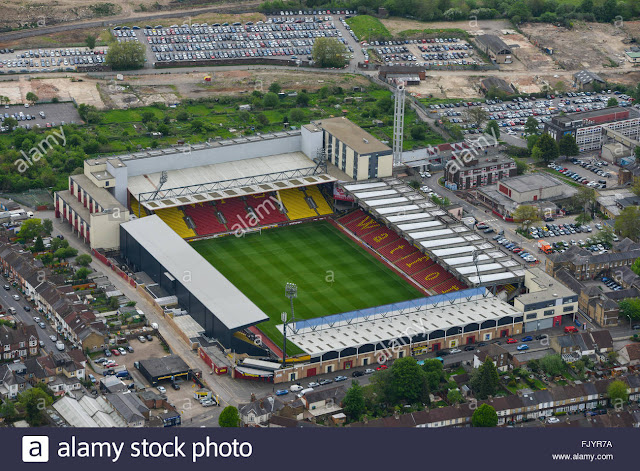 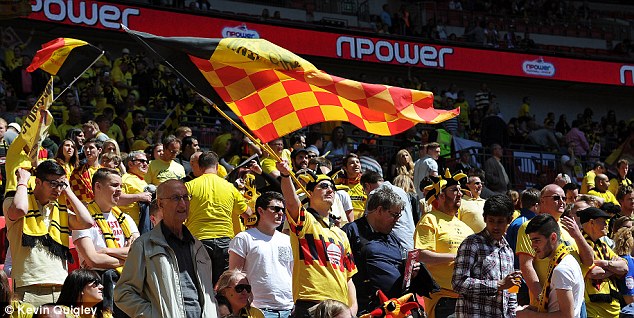 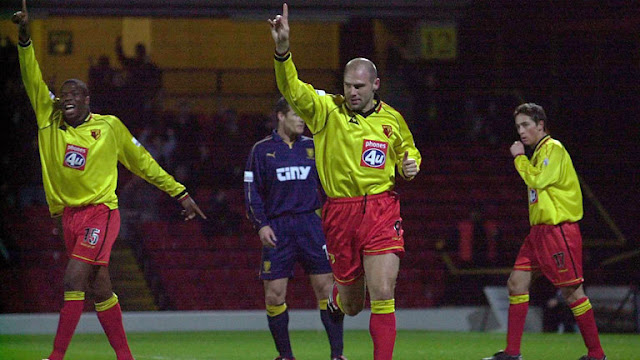 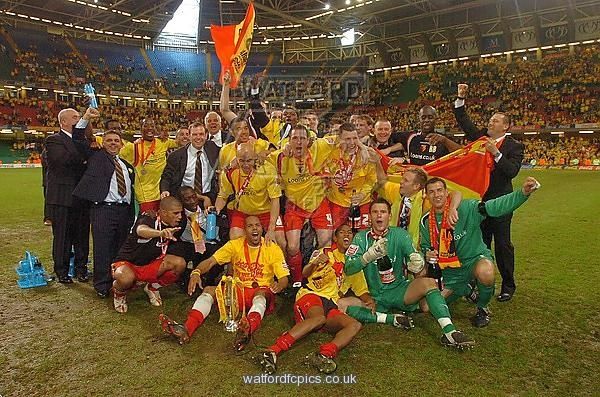 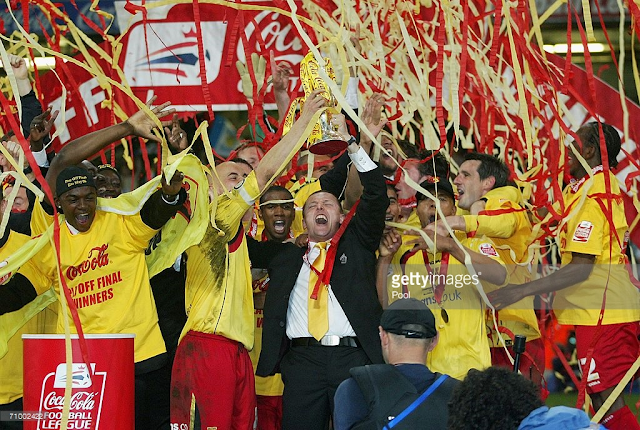 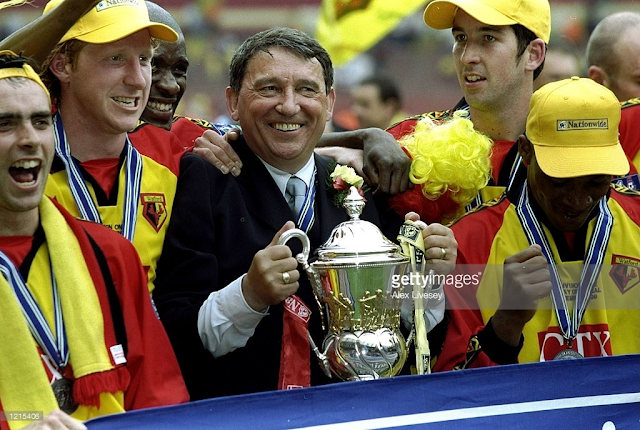 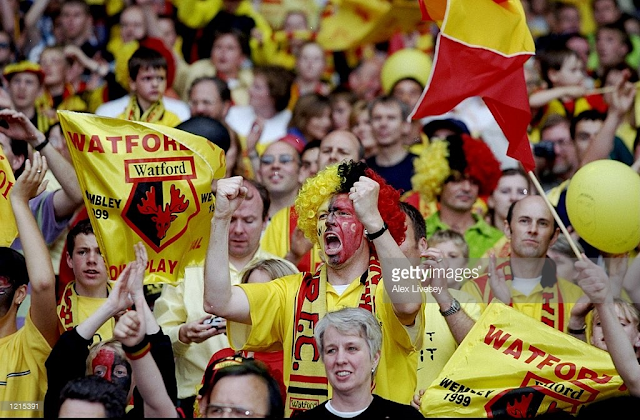 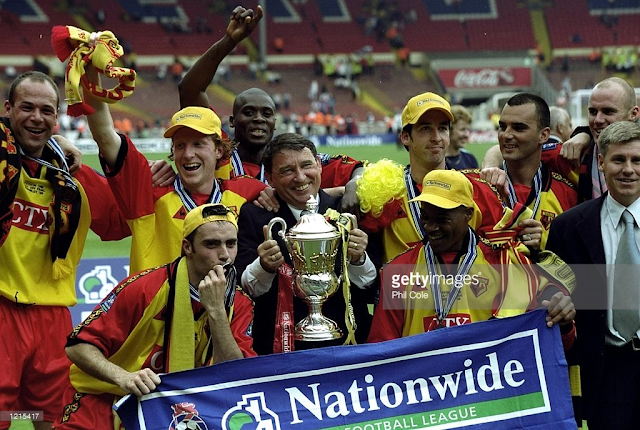 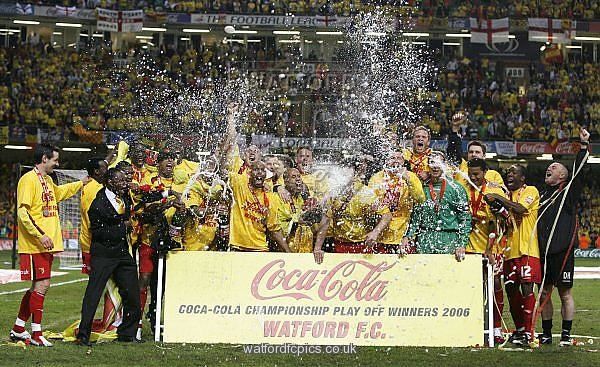 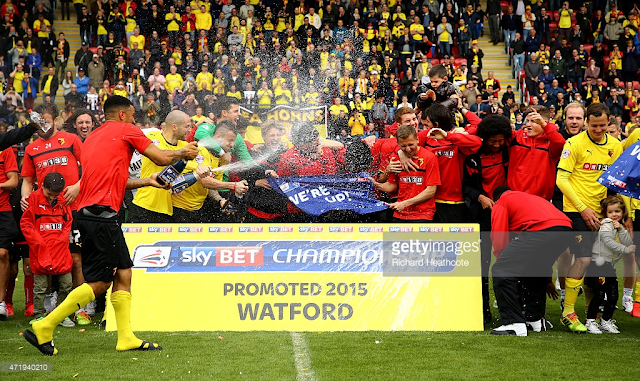 Vicarage Road has been the home of Watford Football Club since 1922, playing at several grounds in the late 19th century. Vicarage Road has a capacity of 21,577. Away supporters are housed in the Eastern side of the Vicarage Road stand which is one side behind the goal. Watford High Street station is the closest to the ground, around a 10 minute walk apparently, also with Watford Junction being fairly walkable to the ground. Watford also has it's own Underground station as well which is just under a mile away from the ground. I wouldn't know too much as the times I have visited Watford I have been on the coach to the ground.

My 1st visit to Vicarage Road was back in the days when I was still at school, but of course this was in the Summer Holidays so it didn't really matter too much. All I can remember was I got the coach with my dad to Watford, at the time I was quite good friends with a Watford fan called Jimmy and met up with him at the ground and spoke for quite a bit of time. The game itself was an avoidable game. Gillingham lost 3-0 with a missed penalty from Gary Mulligan, Efe Sodje got himself sent off and Watford went on to cruise the game by winning 3-0, goals from Tamas Priskin, Alex Campana and Douglas Rinaldi. It was also the same year that Ronnie Jepson finally resigned as Gillingham manager which cheered me up as I didn't personally rate him highly as a manager. Sadly I weren't able to get any pictures then as I didn't hate a digital camera or have a camera on my phone but it was an avoidable night anyway but yeah that's all I really remember from my 1st visit to Watford.

My 2nd visit to Vicarage Road came about when we had beaten Southend in the previous round which I was pleased with, although I wasn't expecting a great tie in the next round, usually we don't do well in the competition. So after hearing from 1 of my good mates after he messaged me saying we got Watford away, I was delighted with the draw. I hadn't been since 2007, plus I wasn't able to get any pictures of Vicarage Road on my only visit, so I was looking forward to this one. Anyway it was sort of similar to my journey 9 years ago. I left home around 3ish and got a lift up with my Dad who was also coming to the game and got to Gillingham just before 4, and left on the coach around half 4. Last time I went to Watford was with my dad on the coach, 9 years later, same happens again haha. Anyway, after hitting a little bit of traffic just before getting to the Dartford Crossing, we got to Vicarage Road around 6.20pm. After getting some pictures outside the ground and having a look in the club shop, I was quite impressed with the redevelopment of the ground since I last went back in 07. Anyway onto the game itself, I think it's fair to say at the least, I wasn't expecting that at all, To see Watford start with the likes of Deeney, Anya, Vydra in the side, and considering it was practically the same team as it was at the 5-0 trouncing of Scunthorpe on the Saturday, again I think it's probably fair to say, I wasn't expecting too much. Anyway, at the end of the 1st half, it was 0-0 which I was more than pleased with, considering Watford at times did look the stronger side, especially with Anya on the wing for them. 2nd half, and we won a penalty which our key man Bradley Dack took. I made the mistake of recording it before he took it live on Facebook, and he missed. Which I was absolutely gutted, and I got ripped into which in all fairness, I can be blamed haha. Anyway my fears of it not being able to be lived down got better as we equalised from a great little finish by Mark Byrne right in the bottom corner. After 90 mins, it finished 1-1, and straight into extra time. And the night was more memorable when Bradley Dack made up for his penalty miss and pus 2-1 ahead with 1 more half in extra time to go. Whistles started to blow at the end, and it was confirmed. We had beaten a Premier League side on their own patch. I was just absolutely gobsmacked and absolutely proud of the players. I never expected us to get anything at Watford, but to win the way we did, was phenomenal, magnificent. Anyway, after the game, I got back on the coach and got home just before 1am. Such a great night. As I'm typing this the night after, we have learnt that we will be playing Tottenham away. I am in shock. From beating a Premier League side on their own patch to be playing Spurs, a dream come true for me. As I have always had a soft spot for Spurs due to family supporting them and going to White Hart Lane a number of times, to see Gills play at White Hart Lane is a dream come true for me. I honestly cannot wait. Up the fucking Gills!

Vicarage Road has been the home of Watford FC since 1922 after playing at several grounds in the late 19th century including Cassiobury Park. It was also home to Wealdstone FC from 1991 to 1994 and also home to Rugby Union club Saracens FC from 1997 to 2012. Vicarage Road has a total capacity of just over 20,000 with away supporters housed on the Eastern side of Vicarage Road which is one end behind the goal. It is shared with home supporters, and away supporters can be allocated up to 2,200 supporters. Watford High Street railway station is the nearest station to the ground, around a 10 minute walk. Although Watford Junction is around a 20 minute walk, but both times I've visited Vicarage Road, I've always gone by coach. 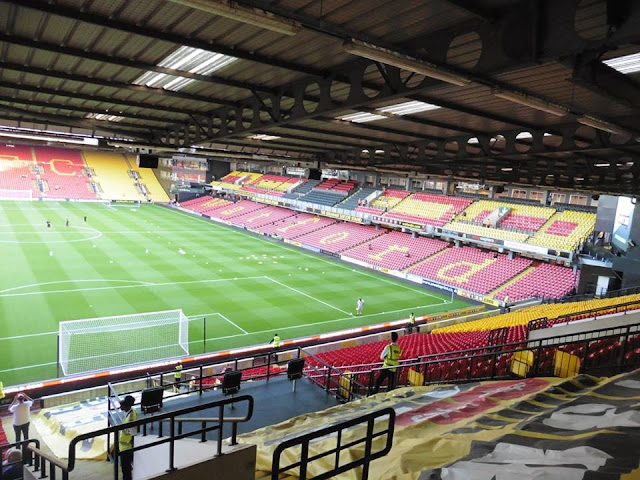 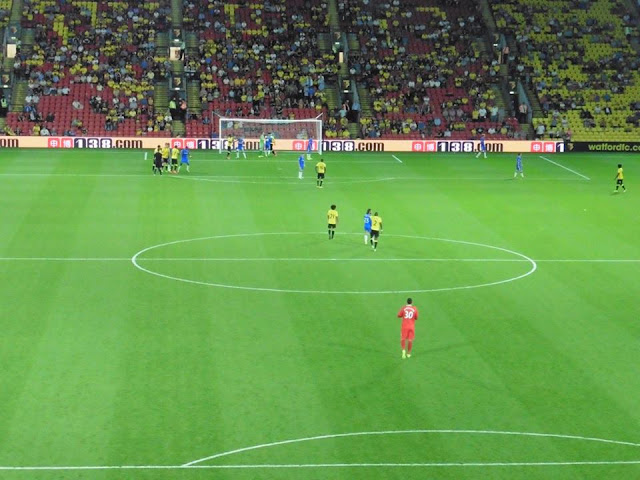 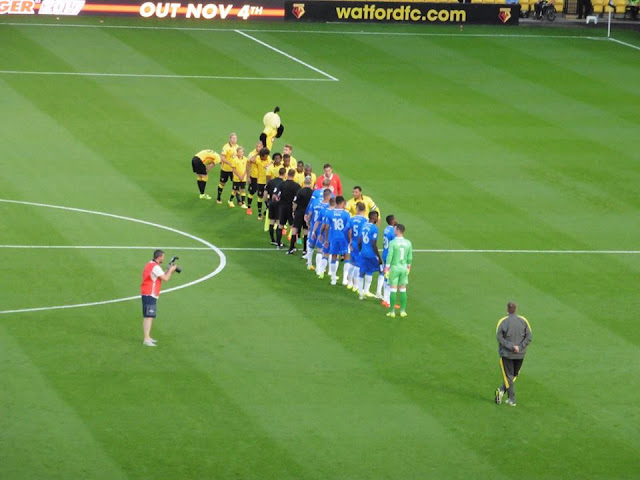 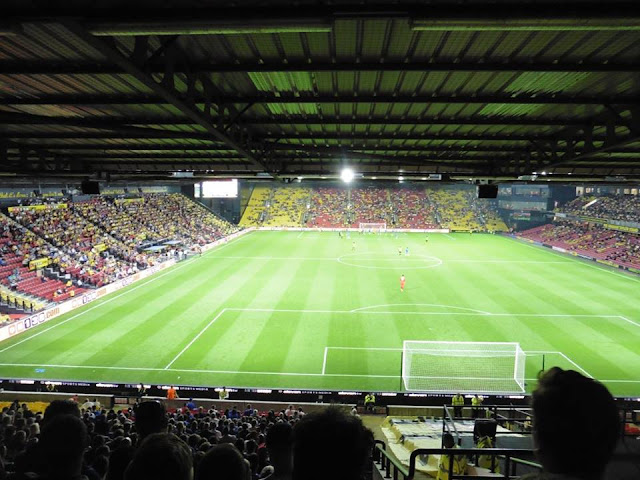 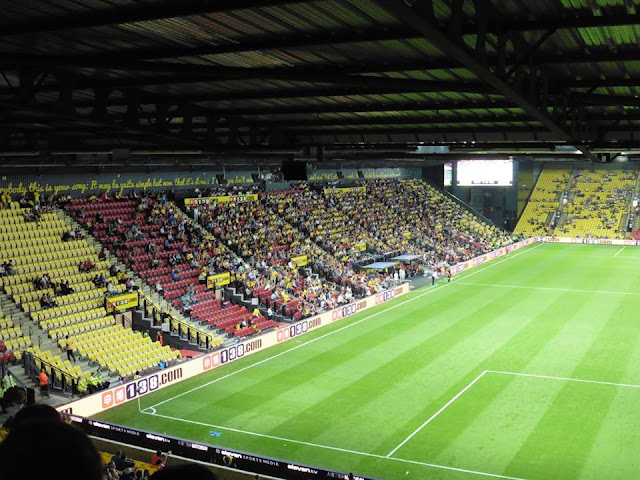 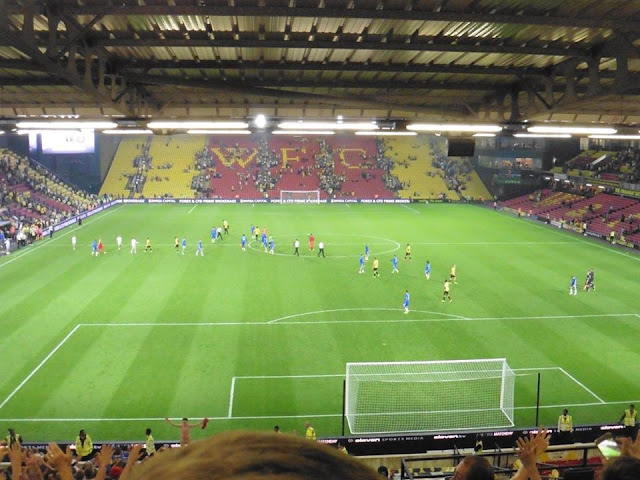 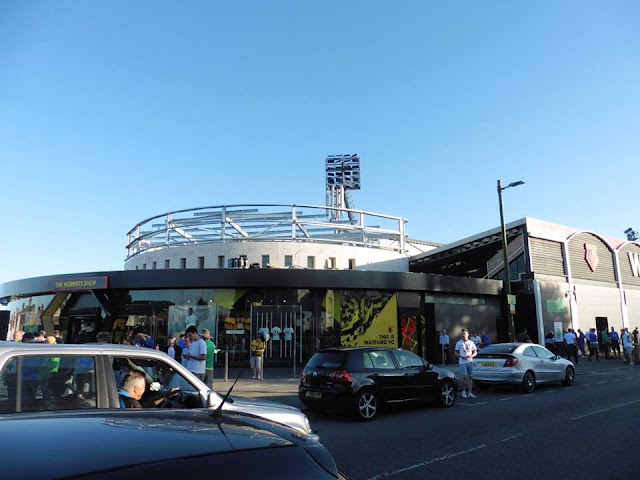 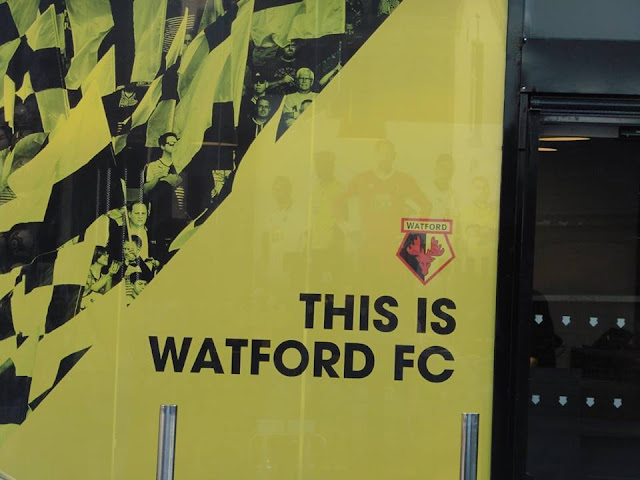 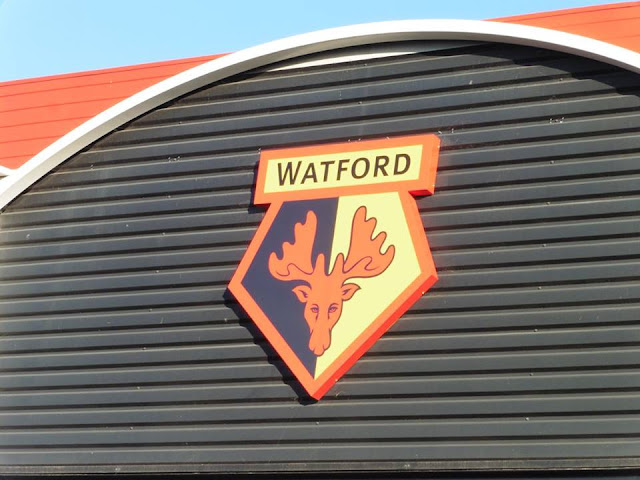 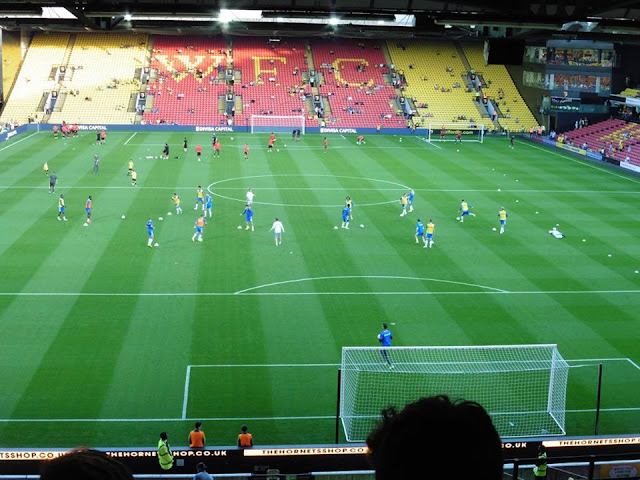 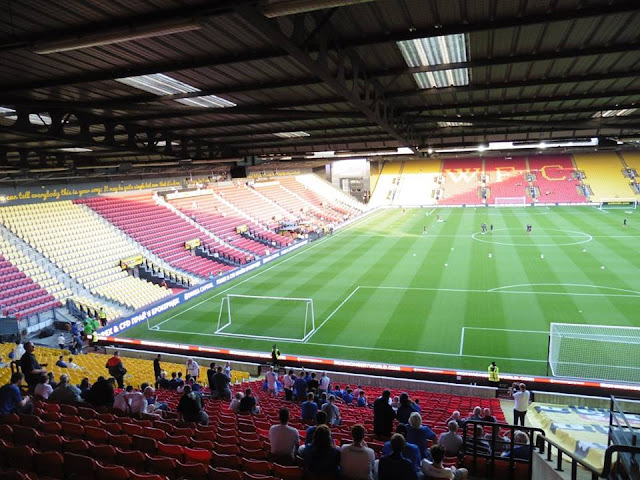 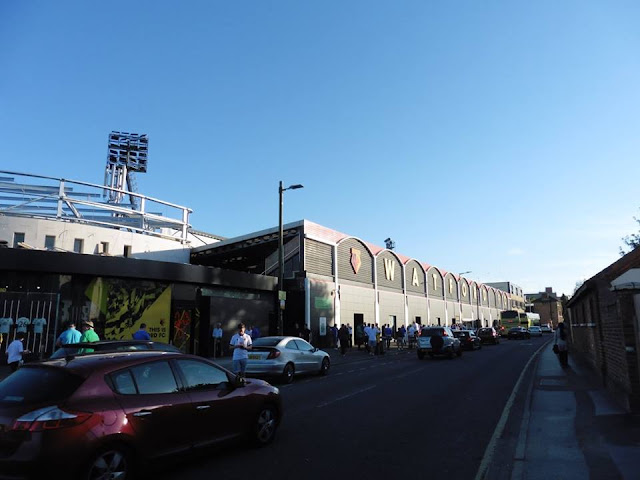